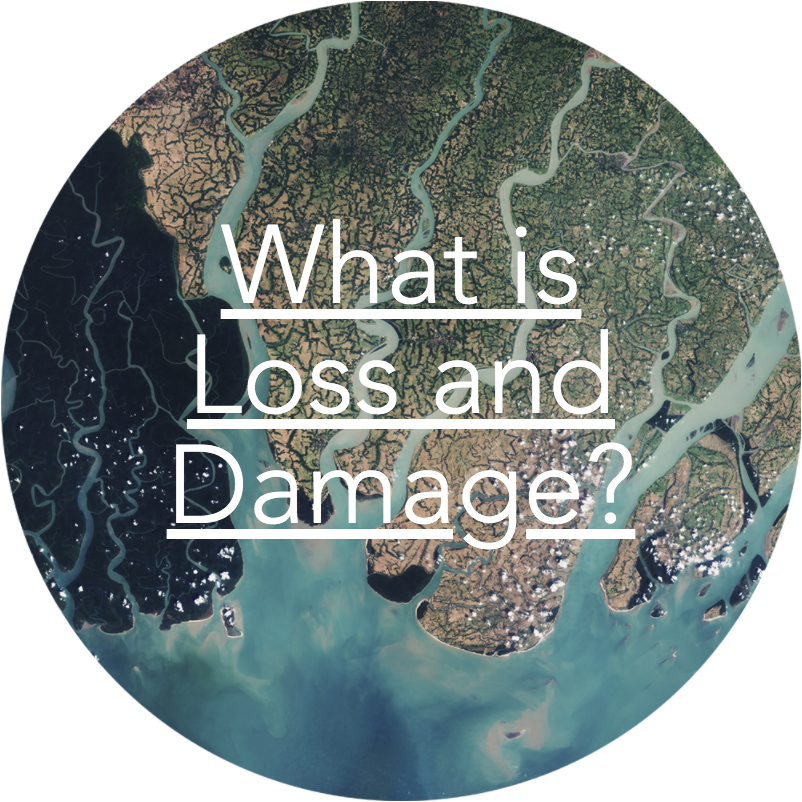 It Is A Term...
The term “loss and damage” (small “l” and “d”) is used to describe the manifestation of climate change impacts which are not or cannot be avoided by adaptation and mitigation efforts (i.e. reducing emissions).

Whereas “Loss and Damage” (big “L” and “D”) is used to describe the policies and plans that are used to address loss and damage, such as those that are negotiated at the United Nations Framework Convention on Climate Change (UNFCCC).

Loss and Damage falls along a spectrum which begins with mitigating climate change, by reducing greenhouse gas emissions, then progresses to adapting to the impacts of climate change, and finally to addressing loss and damage from those climate change impacts that are unavoided or unavoidable.

It Can Be Avoided,
Un-Avoided,
Or Un-Avoidable
The relationship between mitigation, adaptation and other efforts to avoid and reduce loss and damage can be explained by that which is avoided (for example by building a sea wall), that which is unavoided but which could have been through more mitigation and adaptation efforts (for example by doing such things as by preparing a community for when a cyclone hits) and that which is unavoidable (for example when a glacier in the Himalayas is lost forever).
‍
It Is Economic
And Non-Economic
When we are talking about loss and damage that has taken place or might take place in the future, a distinction is made between economic losses which can be monetarily valued (for example the loss of things to can put a price tag on such as goods and services: things like property, cars and belongings) and non-economic loss and damage (NELD) which cannot be measured(for example the loss of things which you cannot buy or sell). Examples of NELD include loss of life, health, territory, cultural heritage, sense of place, agency, identity, indigenous and local knowledge, biodiversity and ecosystem services.

To illustrate this, imagine if an atoll state like Tuvalu disappears due to sea level rise, the people who call Tuvalu home will incur both economic and non-economic loss and damage. Economic losses and damages may include the loss of a house and the property on which it stands. Non-economic losses could include the loss of a territory, loss of cultures including traditional practices and sacred sites, connection to the land and sense of place as citizens are resettled and dispersed across many other countries.

It Happens Quickly and Slowly
Loss and damage from climate change impacts can result from extreme weather events such as storms and floods, as well as from slow onset climatic processes which include increasing temperatures, desertification, loss of biodiversity, land and forest degradation, glacial retreat and related impacts, ocean acidification, sea level rise, and salinisation.

In 2015 after four years of climate exacerbated drought in California 2.7 billion USD and nearly 21,000 jobs were lost in the agricultural sector. This is an example of loss and damage from a slow onset climatic process, which occur over time but are still devastating. In recent years, extreme weather events are occurring with a greater magnitude and frequency. When climate intensified super cyclone Amphan hit Bangladesh and India in May 2020 it caused 128 fatalities and over 13 billion USD in economic loss and damage  as well as significant non-economic impacts arising from the trauma of such high magnitude events which lead to forced migration and displacement.

Developed and developing countries alike are affected by loss and damage. However, developing countries lack the resources to reduce and address loss and damage that developed countries have at their disposal. Global solidarity on Loss and Damage is critical to create a resilient world in which every citizen is thriving. In addition to that, the Intergovernmental Panel on Climate Change (IPCC), which is the UN’s scientific body on climate change, has acknowledged that even with if mitigation and adaptation can reduce warming to 1.5 °C there will still be unavoided and unavoidable losses and damages that will have a greater impact on vulnerable people, communities and countries, the majority of which are in the global South.
What Is The History
Of Loss And Damage Under The UNFCCC?
The United Nations Framework Convention on Climate Change (UNFCCC) was established in 1992 after the UN General Assembly recognized that loss and damage represents a threat to humankind. While the UNFCCC was being negotiated, Vanuatu on behalf of the Alliance of Small Island States (AOSIS) submitted a proposal for a mechanism to address loss and damage from sea level rise in small island developing states (SIDS). This proposal did not move forward, though the UNFCCC does acknowledge the obligation of developed countries to support developing countries in their efforts to address climate change.

The ultimate objective of the UNFCCC is to ensure that collective mitigation efforts stabilise greenhouse gas levels in the atmosphere in a timeframe that allows ecosystems to adapt naturally, does not threaten food production and allows economic development to proceed unimpeded. The UNFCCC includes 197 Parties (or countries which have ratified the Convention). There are two negotiating sessions each year: an intersessional which takes place in Bonn, Germany in the spring and the COP, which is the biggest meeting of the UNFCCC. The COP takes place in a different region each year according to the country that is currently the president of the COP.

Initially, after it was established in 1992, the UNFCCC was focused on mitigation to reduce greenhouse gas levels in the atmosphere and limit climatic change to avoid loss and damage altogether. When it was clear those efforts were inadequate, developing countries advocated for more focus on adaptation. Eventually it became clear that loss and damage from climate change would not be avoided and need to be addressed.

In 2007 at COP 13 in Bali, the term “loss and damage” was first seen in a UNFCCC decision, driven by AOSIS and other vulnerable developing country Parties. In 2010 at COP 16 in Cancun, a work programme was established to increase the understanding of how to assess and address climate related loss and damage. That led to the establishment of the Warsaw International Mechanism on loss and damage (WIM) with the objective of addressing loss and damage associated with impacts of climate change, including extreme events and slow onset events in countries particularly vulnerable to the impacts of climate change. The WIM has three functions:

(2) strengthening dialogue, coordination, coherence and synergies amongst relevant stakeholders; and

(3) enhancing action and support, including finance, technology and capacity building to address loss and damage.

The implementation of the functions of the WIM is guided by the Executive Committee (or ExCom) which includes ten individuals from developing countries and ten from developed countries. It is critical that there be more emphasis on the third function of the WIM: enhancing action and support.

At COP 25 in Madrid in 2019 the WIM was reviewed and as developing countries had hoped, it was strengthened. The Santiago Network on averting, minimising and addressing loss and damage (SNLD) was established as part of the WIM under the COP and the Conference of the Parties serving as the Meeting of the Parties to the Paris Agreement (CMA), the body which governs the implementation of the Paris Agreement. The SNLD’s objective is to catalyse the technical assistance of relevant organisations, bodies, networks and experts, for the implementation of relevant approaches for averting, minimising and addressing loss and damage at the local, national and regional level. For developing countries it is critical that the Santiago Network mobilise action and support (the third function of the WIM) to address loss and damage. Additionally, finance for Loss and Damage must be provided and at the scale of the needs. The economic costs of loss and damage in developing countries alone have been projected to be between 290 billion USD and 580 billion USD by 2030. This is likely a vast underestimation given the setbacks in development brought by the COVID-19 pandemic and additional non-economic loss and damage.
Why Does Loss
and Damage Matter?
The fight for Loss and Damage under the UNFCCC is a fight to recognise the historical responsibility of countries in the global North to pay their fair share to address the climate crisis that has been caused by their historical emissions. The UNFCCC and its Paris Agreement recognise that developed countries should lead in combating climate change and addressing related impacts, in accordance with their “common but differentiated responsibility and respective capabilities”. The efforts towards ambitious outcomes on Loss and Damage under the UNFCCC aim to support developing countries to understand the scale of losses and damages they are suffering and be assisted to identify, prioritise and access technical assistance to address their needs.

The Loss and Damage discussions under the global climate regime (the UNFCCC) are important because developing countries urgently need support to address losses and damages from climate change impacts. The burden to recover from the impacts of the climate crisis should not be placed on the shoulders of the global South and impacted communities.  A study in Kenya found that when households incur loss and damage they may be forced to sell productive assets, withdraw children from school or undertake other “erosive coping” measures which impede their resilience to future shocks and make them more vulnerable to climate change impacts. These choices are even more challenging and critical in light of the COVID-19 pandemic which has hit the most vulnerable the hardest.

There are historical reasons why many countries are still struggling to develop and these must also be acknowledged and addressed. Many developing country decision makers are already overwhelmed with the implementation of development policies and plans such as those aimed at improving health and wellbeing, livelihoods and infrastructures.  It is important to recognise Countries of the global North have a responsibility to address the injustice and inequality that has been caused by the centuries of colonisation and exploitation of communities in the global South.
How Can We
Support Climate Vulnerable Developing Countries to Address Loss and Damage?
Vulnerable developing countries need finance, technology and capacity building which meets the scale of the evolving needs to address loss and damage from the impacts of climate change. They need technical assistance and funding in the form of grants to build the capacity of people on the ground and decision makers to develop and implement measures to reduce and address loss and damage.

It is critical to focus discussions on addressing loss and damage, the mandate of the WIM and the role of the UNFCCC vis-a-vis Loss and Damage. The Paris Agreement recognises the importance of averting loss and damage (through mitigation) and minimising loss and damage (through adaptation). Scaling up both mitigation and adaptation is essential, particularly in light of the IPCC’s Sixth Assessment Report. However, we must not let developed countries divert focus from the important work of addressing loss as the impact of climate change intensity in frequency and magnitude.

To support developing countries it is important  to use the phrase “loss and damage” when referring to the impacts of climate change that are unavoided or unavoidable. It is important to emphasise both the economic and non-economic costs of climate change. This creates solidarity with vulnerable developing countries and also helps raise the profile of Loss and Damage with global change makers. In discussions on the resilient recovery from COVID-19 we need to ensure that there is emphasis on the impacts that COVID-19 has had on the ability of vulnerable countries to build resilience to climate change and address loss and damage.
Image Credit: Contains modified Copernicus Sentinel data (2016), processed by ESA, CC BY-SA 3.0 IGO
Follow us on...