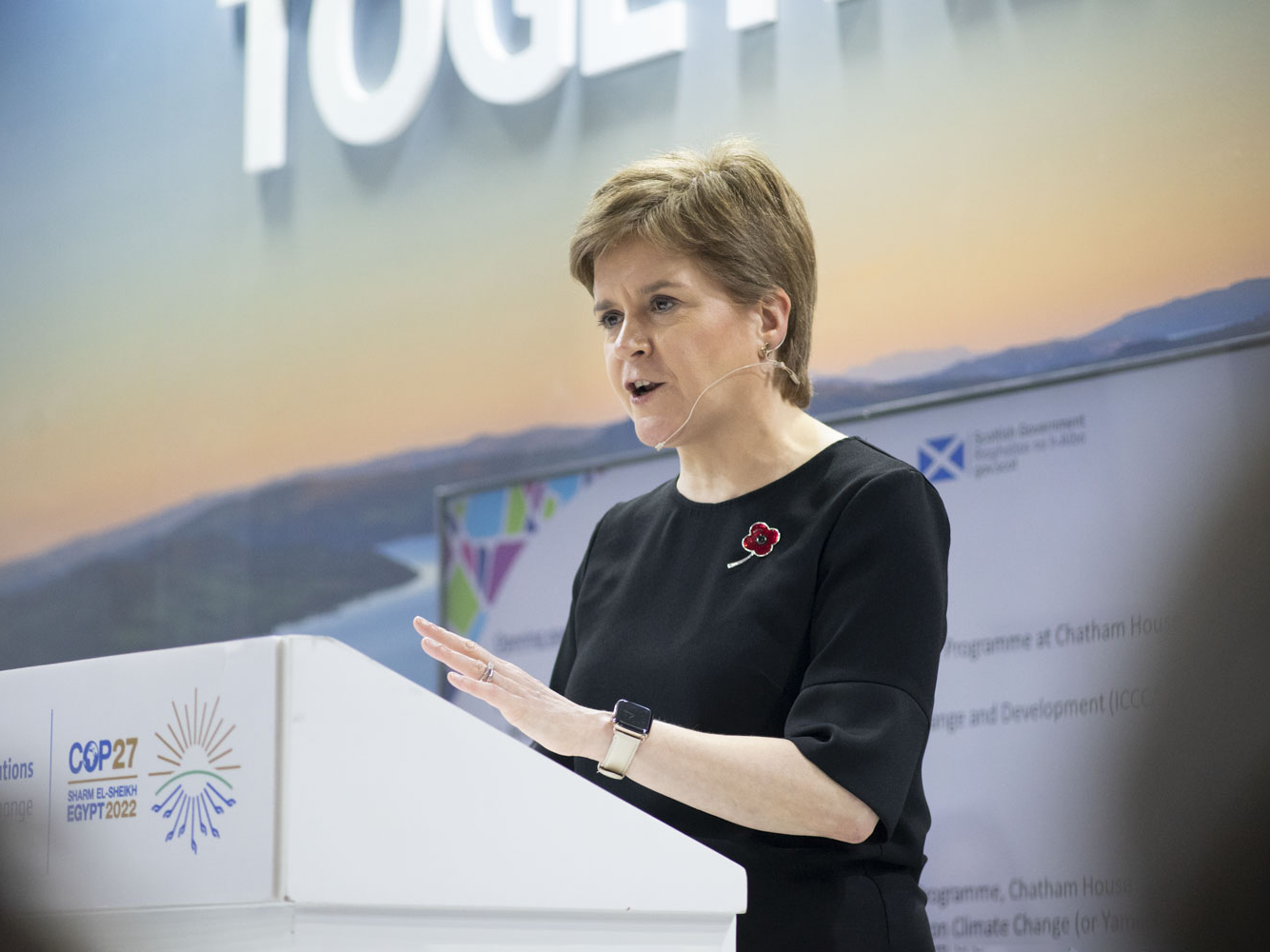 First Minister of Scotland Nicola Sturgeon announces another £5m of funding for loss and damage at COP27 to support communities impacted by slow-onset events and non-economic loss and damage. Image credit: Teo Ormond-Skeaping ©.
On the first day of COP26 in Glasgow, the Scottish Government made headlines as it became the first developed country to explicitly pledge finance to address loss and damage. This announcement was heralded as “breaking the taboo” on Loss and Damage finance, and was welcomed by international civil society, leaders from the Global South, and the UN Secretary General Antonio Guterres.

The Scottish announcement was followed by a similar pledge of finance from the Government of Wallonia and more recently from the Danish Government. Right at the start of COP27, the First Minister has announced another £5m of funding, which will further seek to support communities impacted by slow-onset events and non-economic loss and damage. There is speculation that other states may now make similar pledges at COP27, and a feeling that momentum is building, with the issue of finance to address Loss and Damage set to dominate proceedings in Sharm el-Sheikh.

The Scottish Government, mindful of its position as “first movers” to inform the debate, made a variety of pledges from its initial £2m commitment to both research and action. To help inform discussions on Loss and Damage finance at COP27, this blog sets out to summarise how the Scottish pledge was spent, and draw out some learnings which should inform both negotiations in Sharm and the wider platform for action on the issue.

In the Pacific, CJRF is supporting the Unitarian Universalist Service Committee (UUSC) to work with local partners who are implementing community-led interventions to address Loss and Damage. An example is in Fiji, developing a community communication network for information about weather alerts, evacuation routes, safe locations, and other guidance to help families rapidly respond to severe weather events.

In Africa, the grant is supporting Churches Action in Relief and Development (CARD) in Malawi to work with traditional authorities on interventions identified through a participatory assessment. This work involves reconstructing homes with resilient materials and a pass-on livestock program that includes veterinary services and livestock insurance (for which village savings programs will contribute to premiums).

In Asia, Helvetas Bangladesh is supporting families to make more informed and economically successful decisions about migration, for instance, through skill development, as well as re-building infrastructure and livelihoods damaged by climate disasters. Young Power in Social Action (YPSA) is providing for the basic needs of families who have already been displaced, supporting their transition to alternative livelihoods, alongside building their awareness and capacity to advocate for their rights. Community Teams, composed of previously displaced community members, play a critical role in identifying those in need of support first.

At the global scale, a portion of the grant is being channelled through the Loss and Damage Youth Coalition (LDYC) that has established the LDYC Youth Grantmaking Council of 11 youth from the global south. CJRF has devolved all re-granting decisions for this grant to the Council, which issued a call for 10 grants of $10,000 each and one grant of $50,000 to support young people to design and implement Loss and Damage initiatives in their communities. The grants will fall within five themes: recovery and rehabilitation, relocation and resettlement, non-economic loss and damage, economic loss and damage, education and storytelling.

‍The Scottish Catholic International Aid Fund (SCIAF) is delivering a £500k grant to address loss and damage in communities in Southern Malawi affected by the recent Tropical Storm Ana (Jan 2022) and Cyclone Gombe (March 2022). Prior to receiving this grant, SCIAF had been delivering the Climate Challenge Programme Malawi (CCPM), a community-led climate justice  programme funded by the Scottish Government. Right at the end of implementation of this programme, communities were hit by Ana and Gombe. Some of the CCPM adaptation interventions helped minimise the impacts of the storms. However, the intensity and frequency of these events was too great, and there were significant losses and damages across communities.

The project has therefore been designed to address these residual impacts felt by communities in Nsanje and Zomba districts. The project takes a community-led approach in identifying need, in designing response interventions and in interpreting results. It is informed by action research methodology, in both doing the work to help communities impacted by extreme weather, but also in developing learning with communities through the interventions which can inform global understandings of how to address loss and damage. In such a way, when disseminating results after the project’s conclusion in March 2023, it will aim to bring the perspective of people with lived experience of loss and damage to inform the global discourse on the issue.

Examples of interventions proposed by communities is the immediate rehabilitation of an earthen Dyke alongside a river to protect communities from flooding. The dyke survived Ana but could not withstand the impacts of Gombe, leaving the community vulnerable to flooding when the rainy season arrives. The programme will also support preservation of arts and culture such as the recent Blantyre Arts Festival themed “Climate Resilience through Cultural Preservation”. The programme will work to provide pscyho-social support to communities who have experienced both economic and non-economic losses and damages.

‍The Stockholm Environment Institute (SEI) received a £75k grant from the Scottish Government that was complemented with additional grant funding from the Open Society Foundations to conduct a research project on Operationalising Finance for Loss and Damage. The project runs until the end of 2023 and is being implemented through a research consortium including institutions based in both the Global North and the Global South. The purpose of the project is three-fold:

1. To explore how climate justice principles can guide loss and damage finance measures to ensure that they do not replicate the flaws of traditional climate finance, which struggles to ensure support finds its way to communities most in need.

2. To flesh out the types of potential structures and modalities that could be established at the global, national and subnational levels to ensure fair and quick finance dissemination.

3. To develop a methodology for and conduct locally-led needs assessments of loss and damage finance – including determining how much finance is required and what activities need to be funded in a series of participatory case studies.

Overall, the project aims to provide an evidence base on what loss and damage finance could look like to negotiators as they discuss a potential Loss and Damage finance facility, as well as to funders already aiming to deliver finance to address loss and damage. Thus far, the work has included a comprehensive literature review on climate and development finance effectiveness and humanitarian assistance to draw out key learnings for Loss and Damage, as well as interviews with negotiators, civil society actors, philanthropic funders, local funders and experts to explore the structures and modalities of a potential facility.

‍The International Centre for Climate Change and Development (ICCCAD) has been supported by the Scottish Government to develop further insights into loss and damage needs. Specifically, this support is supplementing research looking at national frameworks for responding practically to addressing loss and damage, and is implemented via the LDC Universities Consortium on Climate Change (LUCCC).

This project involves work at the national level in Malawi and Zambia to develop country scoping studies into approaches which directly address loss and damage, and exploring how such approaches can be integrated into national policy frameworks. The project has three key activities which build upon each other:

The key findings coming out of the scoping studies so far indicated a lack of clear understanding of the issue, low understanding and capacity amongst decision makers, scant data on past and current losses and damage and a lack of explicit policy, legislative and institutional frameworks to address this issue.

‍1. Loss and Damage is both a facet of need and core facet of global climate justice

‍The discourse on Loss and Damage at COP is inherently tied to the concept to multilateral agreements due to its relation to the polluter pays principle, climate justice and the fact that the concept has evolved through the UNFCCC. However, bi-lateral loss and damage support, such as that given by Scotland, can address loss and damage with the urgency so desperately needed whilst the world waits for a formal financial architecture through the UNFCCC. Such funding can begin to meet the urgent needs for communities now which are not currently met by other sources of funding, such as  as in relation to dignified managed migration, long-term reconstruction after disasters or cultural preservation to address Non-Economic Loss and Damage (NELD). Nevertheless, Loss and Damage should not be considered to be either purely about getting finance to respond to the impacts of climate change or purely the need for polluters to pay for those impacts. Rather, we should regard the former as a subset of the latter, and bilateral aid marked as loss and damage which also speaks to the wider context can enhance climate justice at the international scale.

‍2. While finance must be additional, loss and damage action must go hand-in-hand with adaptation

Whilst the coding of climate finance is vitally important on a global scale, at the local level, communities are little concerned with how the funding is classified. Moreover, it is apparent that there can be no external, fully objective determination of whether impacts are at the hard or soft limits of adaptation, as this must be to some extent socially and politically agreed through a participatory project design. Communities may identify interventions as a response to losses and damage which may otherwise be considered to be “adaptation”, and loss and damage funding must recognise that this is an adequate response. What makes a project “loss and damage” what it is responding to (i.e. extreme weather or sea-level rise) as well as the nature of the response, and the barriers between loss and damage and adaptation are not as clear cut as some of the global discourse on financing has historically made out. Loss and damage finance must be separate and additional, but also complement existing climate responses. Loss and damage and adaptation should be seen as on the same continuum of action. Furthermore, community-led approaches are essential to effective loss and damage programming because of the politically contested nature of the definition of loss and damage, and funders must recognise that this requires time and financial investment.

‍In order for loss and damage finance to be grounded in climate justice, it needs to adhere to the following key principles: 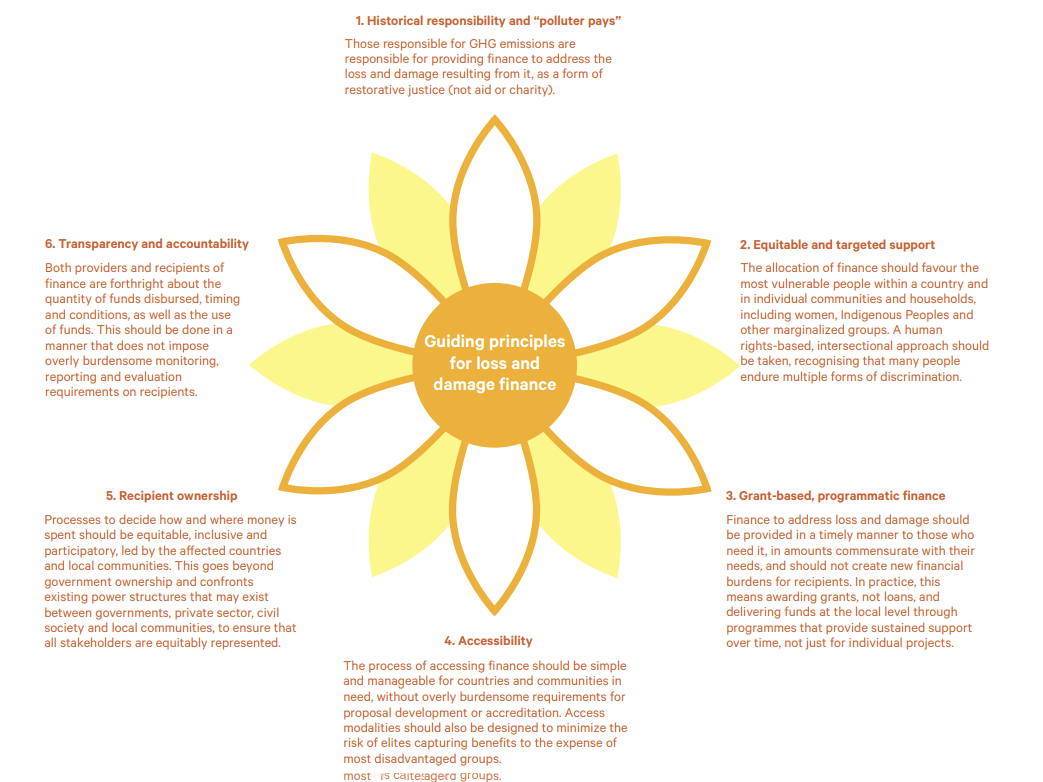 Guiding principles to support climate justice in loss and damage finance
This will ensure that loss and damage finance is designed in a manner that places the needs and priorities of vulnerable and marginalised communities facing loss and damage at the centre. This includes giving those communities significant decision-making power over utilising finance according to their own needs. Small grants, programmatic finance and unconditional cash transfers, as opposed to loans or project-based finance, are also likely to be more accessible for recipients and more successful in reaching affected communities.

‍Whilst bi-lateral loss and damage can be highly effective in supporting communities, work needs to be invested in now to build up national-level response mechanisms which can deliver loss and damage finance to communities and households when greater resources begin to flow. It is vital that these mechanisms are informed by the principles addressed above, and especially that they are inclusive and support a community-led approach. Such national mechanisms can help in defining the terms upon which loss and damage finance is accessed in a needs-based, context specific manner, and can be more effective in the full range of loss and damage responses that must be considered (including social protection programmes).