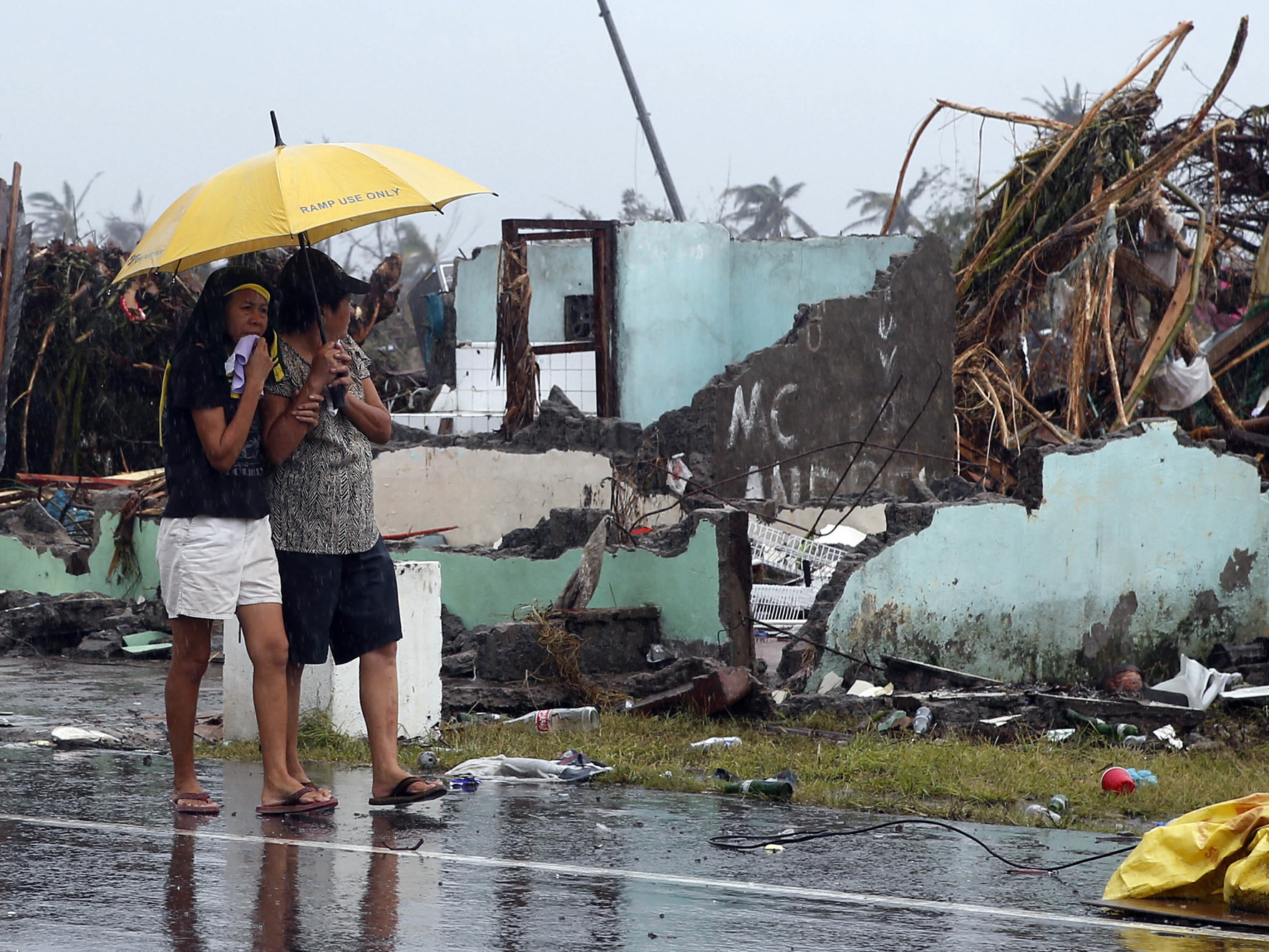 The aftermath of Typhoon Haiyan. Image credit: Tifón Haiyan-Yolanda en Filipinas (Erik de Castro - Reuters), by Mans Unides , licenced under CC BY-NC-ND 2.0
Loss and damage from climate change is already costing vulnerable communities dearly. These communities have played almost no role in causing the climate crisis, yet they are now paying for it with damaged and destroyed homes and schools, lost crops and livelihoods, and the loss of loved ones.

Vulnerable communities urgently need support to deal with loss and damage - provided on the basis of solidarity and polluter-pays by the countries and companies who are responsible for the climate crisis.

Shenanigans around definitions have been used to block progress on finance for loss and damage, in addition there are some legitimate but surmountable questions. Here I explore the interaction and the difference between loss and damage, adaptation, disaster risk reduction, emergency humanitarian disaster response as graphically represented below. And propose a way to solve definitional challenges. 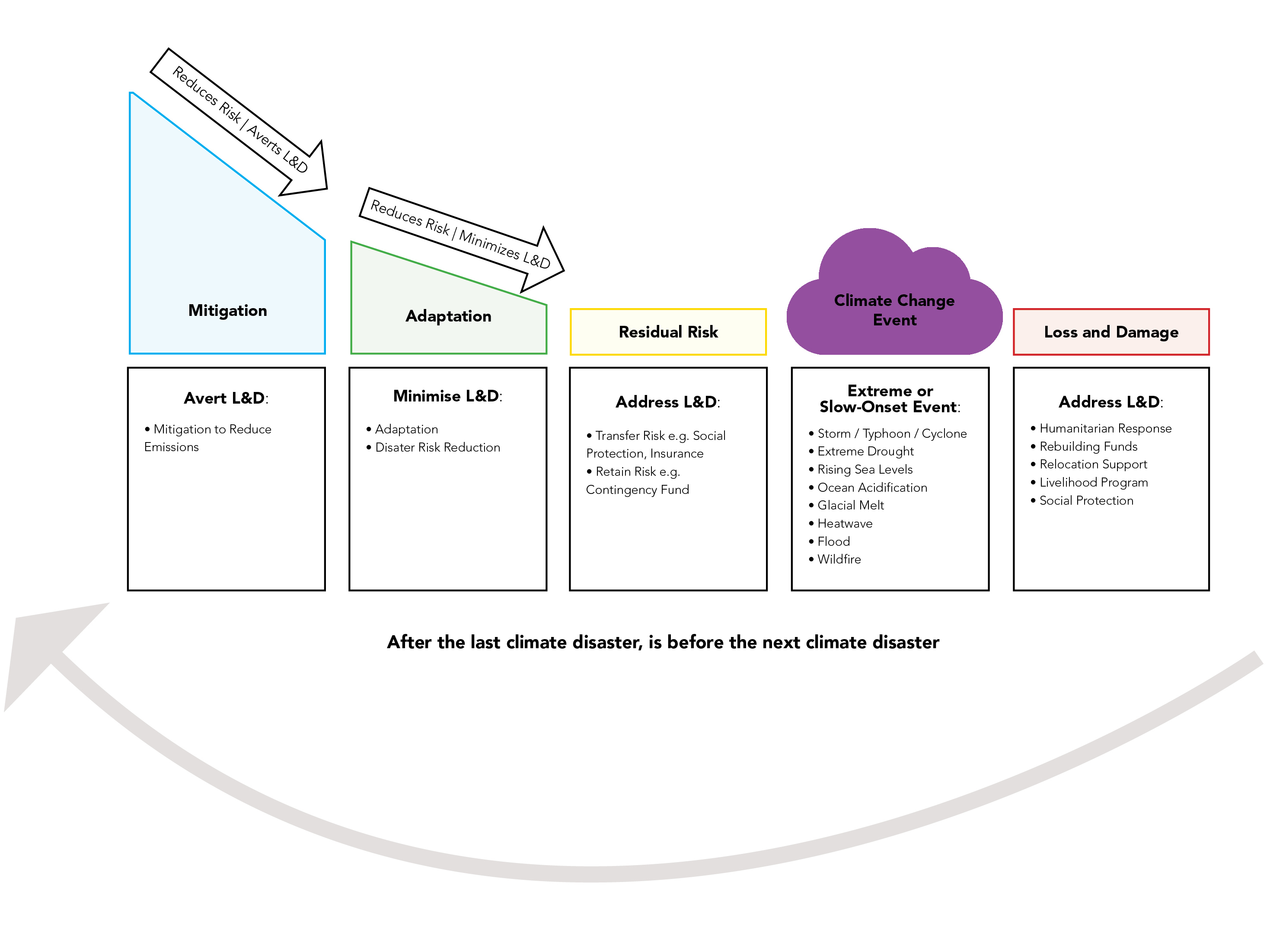 "After the last climate disaster, is before the next climate disaster." Diagram by Julie-Anne Richards
Loss and damage is the impacts of climate change that occur because not enough mitigation, adaptation or disaster risk reduction (DRR) has happened.

‍Mitigation actions reduce the rate of climate change by limiting or preventing greenhouse gas emissions and by enhancing activities that remove these gases from the atmosphere (IPCC). Mitigation averts loss and damage by reducing the risk of a climate change event occurring.

‍Adaptation is defined by the IPCC (2014, p5) as the process of adjustment to actual or expected climate and its effects. Adaptation activities reduce or prevent the risk of harm from climate change impacts.

‍Disaster risk reduction (DRR) focuses on minimising risks from sudden-onset hazards, be they climate-induced or not (Kreienkamp & Vanhala 2017). There is a lot of overlap between DRR and climate adaptation.

‍There is absolutely a ‘grey area’, an area of overlap, between adaptation and DRR activities and loss and damage activities. From a practical, on-ground, implementation perspective programs in communities should be streamlined. However, from a conceptual point of view, and from an international climate funding perspective, it is useful and might be necessary to distinguish between the two.

The difference can be understood as: adaptation is adjusting to the effect of climate change in a way that allows the community to substantially continue their traditional, or existing, livelihood. Whereas loss and damage is when climate impacts go beyond adjustments and instead requires an altogether different order of magnitude reaction, a complete reorientation in response to significant harms, that takes the community (or individual) outside of the realm of the traditional approach.

Turning to humanitarian disaster response, we propose that where the disaster, and the subsequent impact, was caused or made worse by climate change, then it is loss and damage from climate change.

For instance, if it is a ‘normal’ typhoon – that is wind speeds, rainfall and storm surge, fall within historical parameters and aren’t occurring more frequently than historically expected – it could be dealt with using traditional disaster response channels. If the impacts fall outside of these ‘normal’ parameters, then additional resources are needed for this loss and damage from climate change. Either attribution science, or historical parameters should be used. A lack of complete ability to attribute specific events to climate change should not hold us back from recognizing that impacts are becoming more severe and more frequent (e.g. when droughts are considered) and are exacerbated by underlying conditions having changed (e.g. sea level rise leading to storm surges with greater impact).

This is important, as disasters are getting much worse and much more frequent, overwhelming not just local communities ability to cope, but also the willingness of the international community to fund humanitarian appeals. A recent report from Oxfam (2022) shows that funding requirements for UN humanitarian appeals linked to extreme weather are eight times higher than they were 20 years ago, and over the past five years nearly half of appeal requirements have gone unmet. Funding for emergency humanitarian response is painfully inadequate.

WHAT COUNTS AS A LOSS AND
DAMAGE ACTIVITY?

‍To make it straightforward, whether something is a loss and damage activity could be delineated by answering this set of questions:
‍
• Was the impact likely caused by, or made worse by, climate change?
‍
• Does the impact require a significant change to traditional, or existing, livelihood, going beyond adjustments and instead require an altogether different order of magnitude reaction?
‍
• Does it involve loss of something the community values and depends on?

What stands out most clearly is that there is currently a massive shortfall in available climate, development, risk reduction and disaster recovery financing, and an urgent need for loss and damage funding. And that we can’t let definitional arguments get in the way of action.


SOME EXAMPLES OF LOSS AND DAMAGE IMPACTS:
‍ 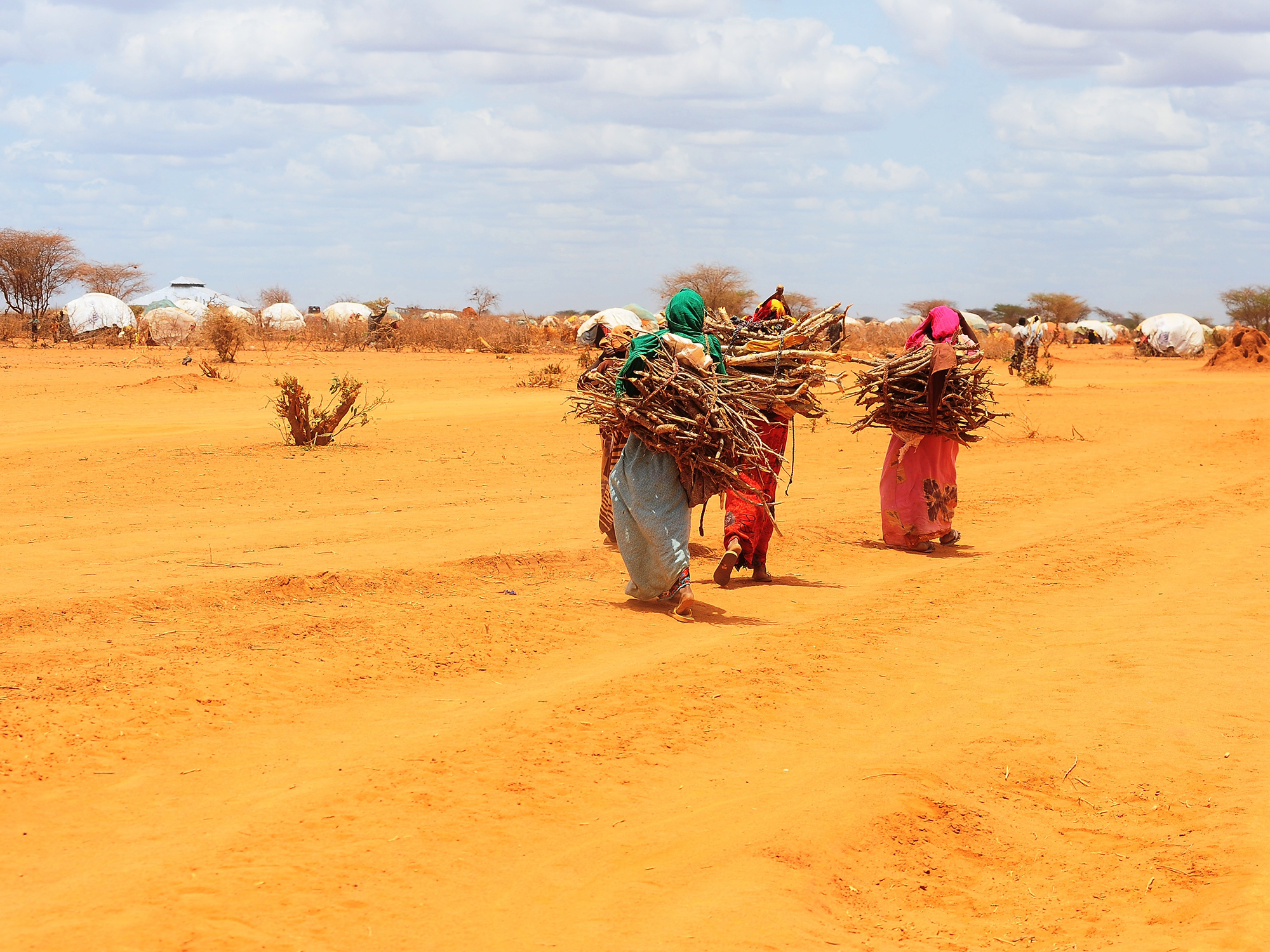 Drought Kenya. Image credit: Kenya, September 2011, by IHH Humanitarian Relief Foundation, licenced under CC BY-NC-ND 2.0
Loss and damage from increasing drought: Climate change poses an ongoing and serious threat to Kenya’s economy. Already, it accounts for a loss of approximately USD 0.5 billion per year, which is equivalent to 2% of the country’s GDP. This cost is expected to rise and could eventually claim 3% of Kenya’s GDP by 2030. From 2008 to 2011 the Horn of Africa suffered the worst drought in 60 years. At its peak it left 13.3 million people with food shortages and led to a large number of people dying. Across the four year period of drought, the Government of Kenya estimated losses of USD 12.1 billion in total. Major areas of loss included: agriculture USD 1.5bn; livestock USD 8.7bn; water and sanitation USD1.1bn; and other areas including agro-industry, fisheries, nutrition, health, education and energy. The poorest people suffered the greatest losses. As the drought lasted more than four years, poverty increased in both qualitative and quantitative terms, and the Government of Kenya had to divert funds and significantly increase its efforts to reduce poverty in the medium- to long- term. (Boom et al 2016 in Richards and Schalatek 2017).
‍ 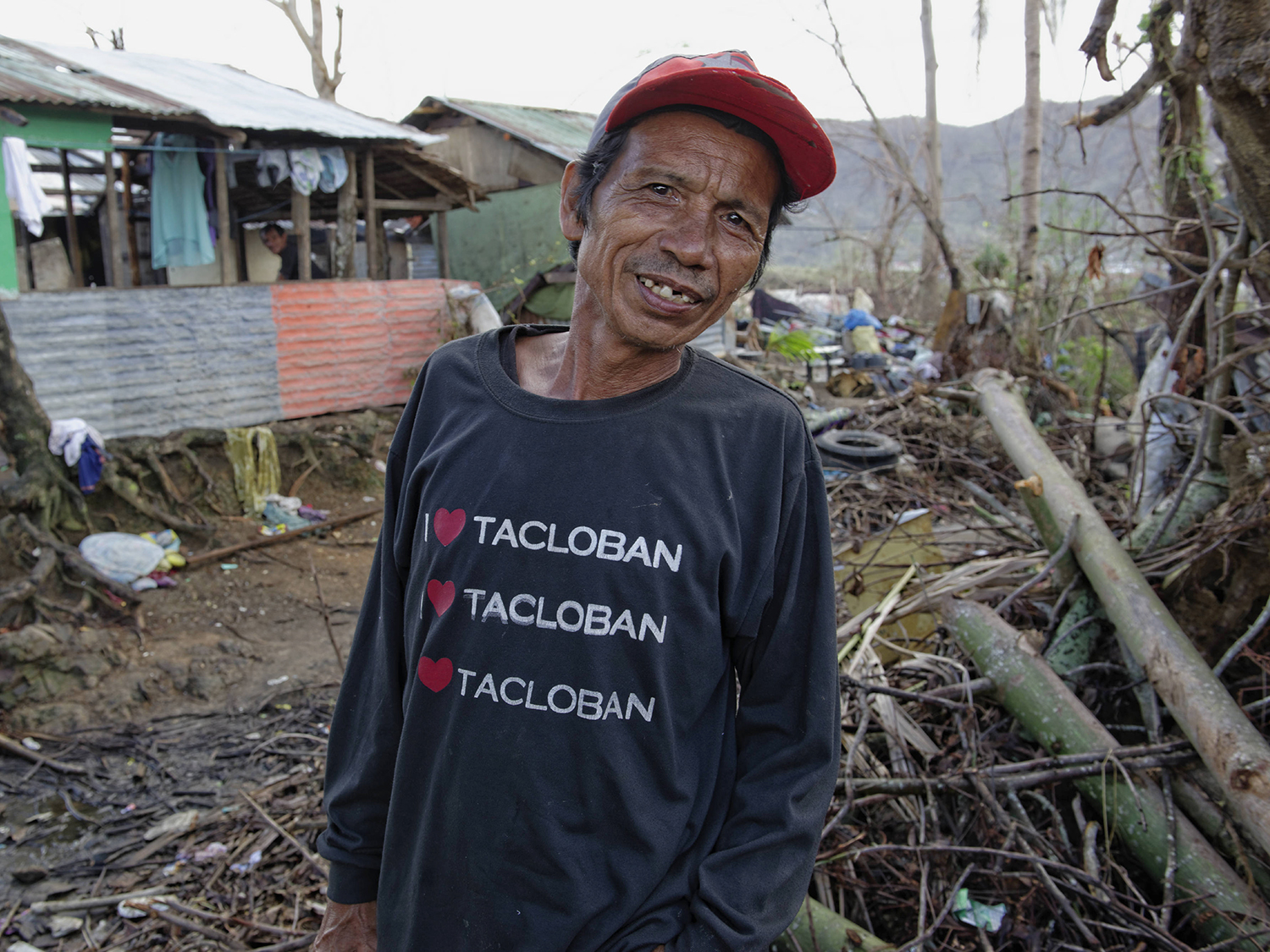 Tacloban city was the worst hit by Super Typhoon Haiyan, which devastated the central Philippines on November 8, 2013. Image credit: Typhoon Haiyan , by International Labour Organization ILO , licenced under CC BY-NC-ND 2.0
Damage from supercharged typhoon: In November 2013 Typhoon Haiyan (or Yolanda as it was called locally) devastated the Tacloban region of the Philippines. As a country that has frequent typhoons and storms, the government and locals had many coping mechanisms in place. However, with sustained wind speeds up to 195mph (314kph), Typhoon Haiyan was the strongest ever tropical storm to make landfall. So traditional coping mechanisms were blown away. Typhoon Haiyan forced four million people from their homes, destroyed or damaged one million houses and killed 7,354 people. As it fell outside of normal, historical parameters this storm is likely supercharged by climate change, and therefore falls within the categorization of loss and damage. The International Disaster Database (EM-DAT) quantified the damage of Typhoon Haiyan at USD 10 billion (Boom et al 2016  in Richards and Schalatek 2017).
‍ 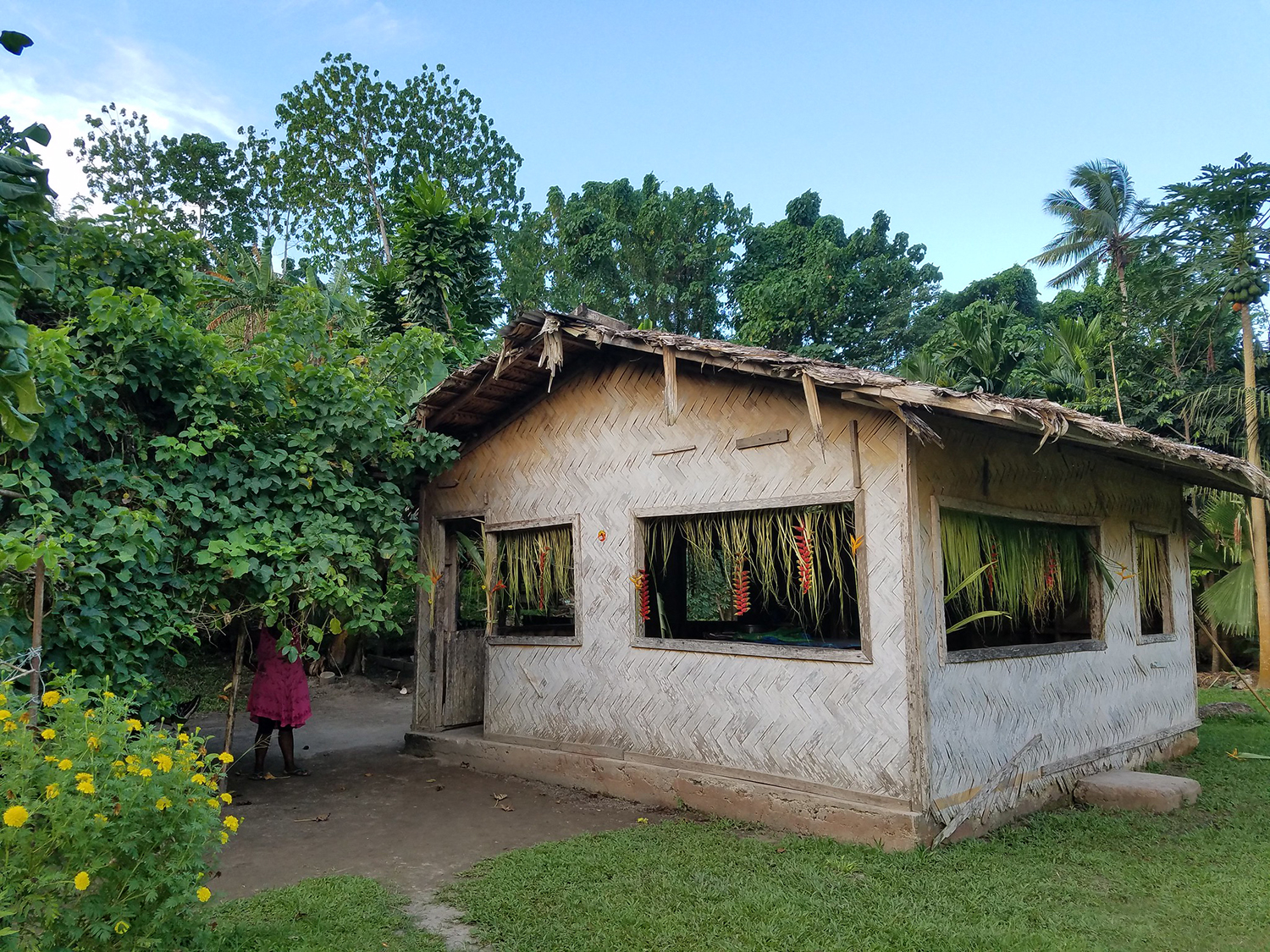 New home for relocation. Image credit: Papua New Guinea Building, by uusc4all , licenced under
CC BY-NC-ND 2.0
Relocation forced by rising sea levels and loss of land: The 6,000 people who live on the Carteret Islands of Papua New Guinea are finding their home increasingly untenable due to rising sea levels which are leading to loss of land, and damage from salt water inundation is leading to food insecurity as traditional crops won’t grow. The community group Tulele Peisa (which means ‘sailing the waves on our own’) is working to relocate 50% of the population and ‘maintain our cultural identity and live sustainably wherever we are.’ With the support of the Roman Catholic Church and the PNG Government, Tulele Peisa is slowly relocating Carteret Islanders to Bougainville. It was estimated by Tulele Peisa in a report by Displacement Solutions that USD 5.3 million is required from 2009 to 2019 to ensure the basic needs for a successful resettlement are met – USD 6,500 for land and housing for each family (Boom et al 2016  in Richards and Schalatek 2017).

‍This blog post is based on a 2017 article co-authored with Liane Schalatek: Julie-Anne Richards and Liane Schalatek. Financing Loss and Damage: A Look at Governance and Implementation Options. Heinrich Böll Stiftung North America, Washington DC. 9 May 2017.

Thanks to L&DC colleagues Teo Ormond-Skeaping, and Colin McQuistan of Practical Action for helpful input and insights.

‍Julie-Anne Richards works as an independent consultant and as an expert with the Loss and Damage Collaboration. She has two decades of experience working on the climate crisis, has written extensively on loss and damage, and campaigned with civil society and in collaboration with vulnerable countries on the need for loss and damage finance.
Follow us on...