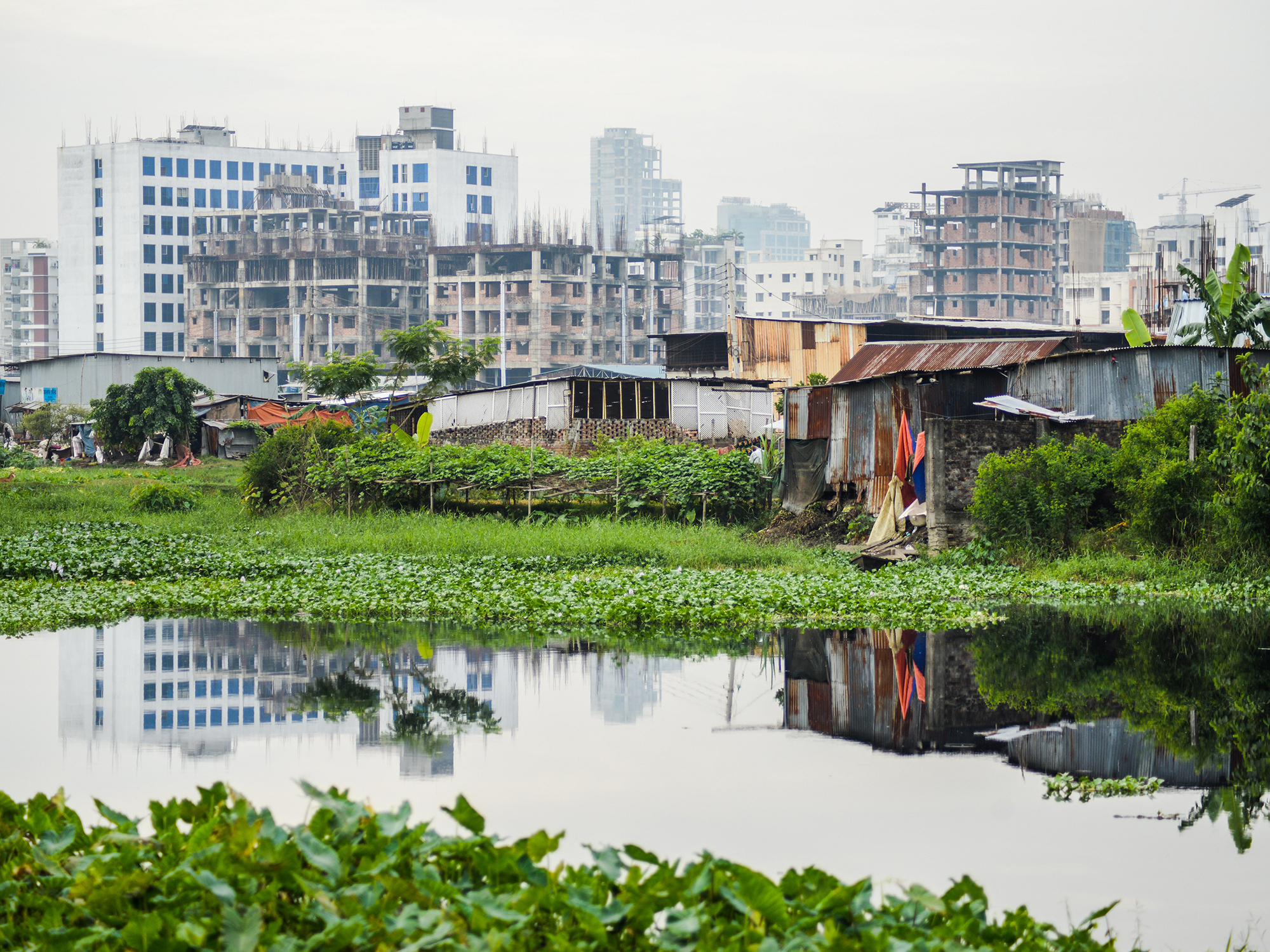 Kallyanpur Basti, Dhaka, Bangladesh
The year 2020 starkly exposed anti-blackness and many other forms of racism in societies of the Global North, leading to increasing recognition of the linkages between racial and climate injustice. The COVID-19 pandemic highlighted and exacerbated socio-economic inequalities both within and be-tween countries. Inside the climate movement, calls were made for a just and resilient recovery from COVID-19 so as to address such inequalities. While protesting racist violence and injustice, the Black Lives Matter (BLM) movement also highlighted how environmental, climate and racial injustice are intertwined. At the same time, the role of racism in international climate policy was the focus of discussion in a number of recent articles and blogs, including by former United Nations (UN) Secretary General Ban KiMoon.1 As 2020 became the hottest year on record,2 extreme weather events continue to bring devastation in the Global South, while within countries of the Global North they are hitting Black, Indigenous and People of Color (BIPoC) the hardest. At the same time, developed countries have failed to meet their commitments under the United Nations Framework Convention on Climate Change(UNFCCC) and the Paris Agreement. To fully understand today’s systemic risks and con-verging crises, it is important to look into the root causes of racial and climate injustice. 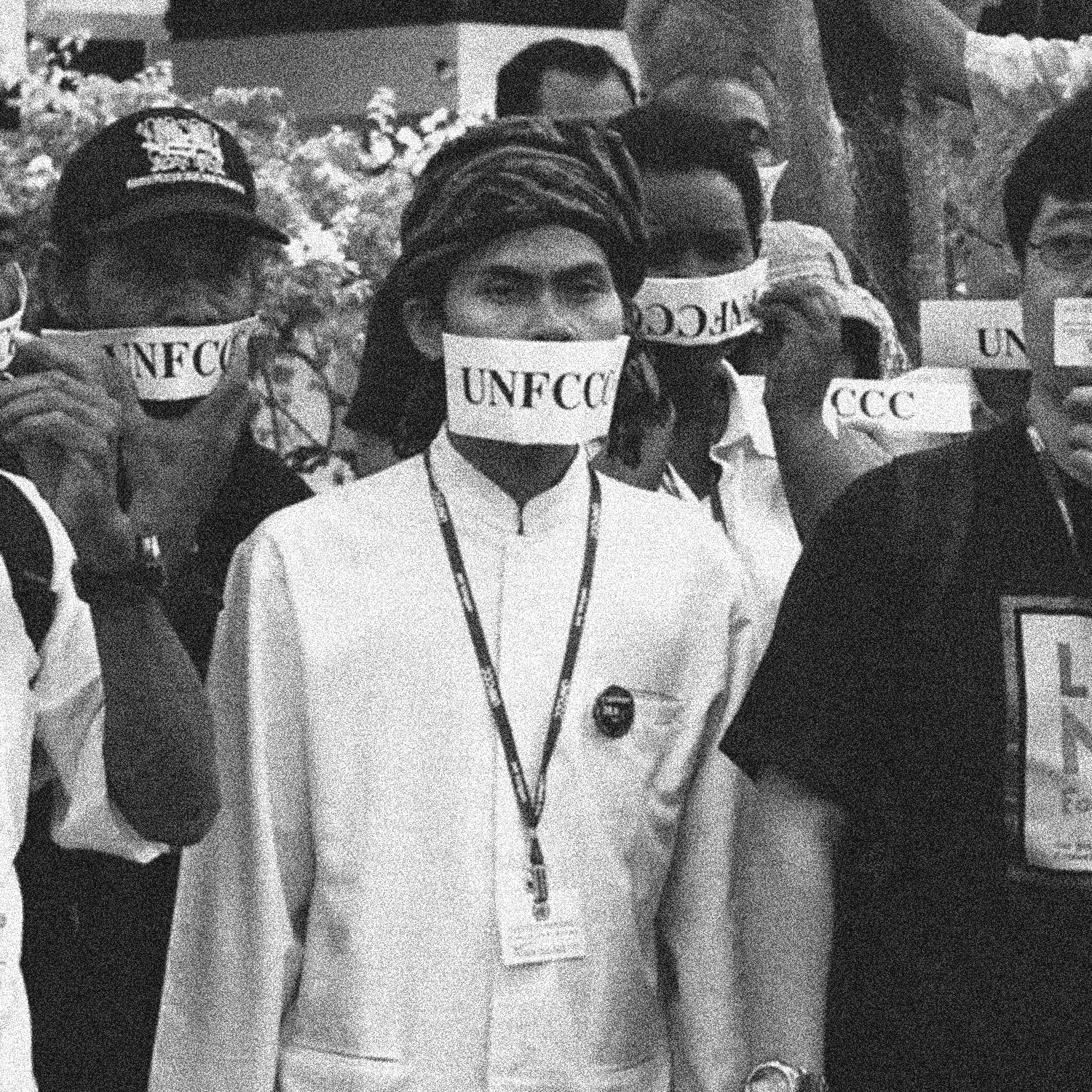 Indigenous peoples representing regions from around the world protested outside the climate negotiations today wearing symbolic gags that read UNFCCC, the acronym of the United Nations Framework Convention on Climate Change, symbolizing their systematic exclusion from the UN meeting. Photo credit: Orin Langelle / Transnational Institute.
Decades of research and activism on environmental racism3 provide a proven frame-work to analyze the global distribution of the impacts of the climate crisis, as countries and regions which were formerly colonized bear the brunt of current and projected future climate change impacts. In addition, emerging literature increasingly recognizes that the Global North’s “developed” status is intrinsically linked not only to their own standards and Western definition of what it is to be developed, but also to their shared colonial past. Yet, countries that started the colonial project continue to shape the global development agenda, including development re-search, financial assistance and climate fi-nance discourses.4 These realities and re-search findings have implications for climate policy and action. This framing paper therefore examines the ways in which colonialism and racism have shaped climate change, climate policy, the international agenda for development aid related to climate change, and climate finance interventions, as well as the resulting impacts of climate change on populations. It shares reflections on the key roles colonial continuities and prevailing racist hierarchies continue to play in the inter-national community’s failure to effectively respond to the climate crisis. It also provides in-sights on ways to urgently address institutional racism in climate change policy and action, with a focus on international climate governance.

This paper presents: (I) how colonialism and racism have enabled climate change, (II) how colonialism and racism have shaped cli-mate policy and action, and (III) how racialized communities are disproportionately impacted by climate change within countries.It also suggests ways to urgently decolonize movements, institutions and both white and BIPoC physical bodies through a deep cultural change, as well as undertake structural and institutional reforms to address institutional racism at scale (IV). The paper demonstrates that there can be no climate justice without racial justice, and that a clear, deep and empirically grounded understanding of the many links between those two types of injustice is essential to addressing both, from their foundations up.

2 See: https://www.nasa.gov/press-release/2020-tied-for-warmest-year-on-record-nasa-analysis-shows.
‍
3 Environmental racism is described by Bullard, (2004) as“systems that produce and perpetuate inequalities in exposure to environmental pollutants” and thus cause disproportionate harm to BIPoC individuals and communities.