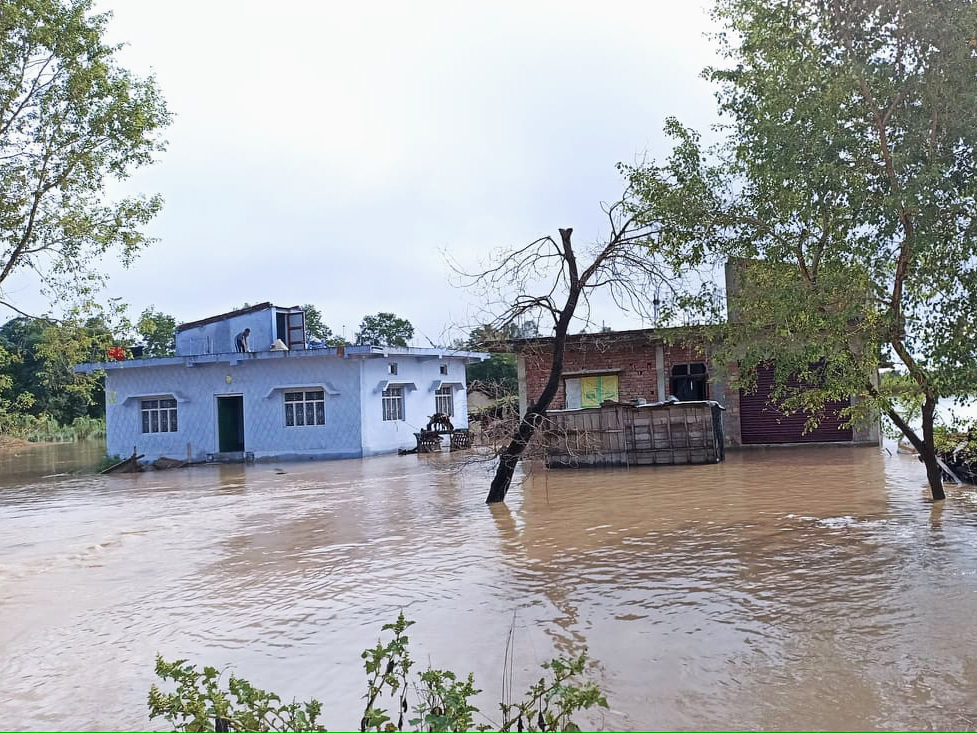 While there continue to be disagreements about how to address climate induced loss and damage in the negotiations at the UN Climate summit, COP26, people in many developing countries struggle daily with climate related disasters. When the climate becomes a threat: Evidence of climate change induced Loss and Damage in Nepal, a new report by DanChurchAid, a Danish member of the ACT Alliance, Launched the 8th of November 2021, assesses the situation in three municipalities in Nepal.
‍
Climate induced loss and damage is a reality in Nepal, Film Credit: Rajan Thapa, DanChurchAid Nepal

All three have experienced either flooding or landslides, two natural hazards which are linked to climate change. Nepal is vulnerable, and affected both by melting glaciers, and increased temperatures and rain. In such a mountainous country this has dramatic effects.

The report shows how people were forced to leave their houses, and how the water and the landslides destroyed their property and fields, and killed their cattle. None of the three municipalities received international support, but local authorities and civil society organisations provided some immediate support. However, this support was far from enough and 82% of the households had to take out loans to recover and reestablish their homes. 9% chose to permanently leave their homes, and can thus be called climate-induced displaced people.
‍
Locally led adaptation is needed, Film Credit: Rajan Thapa, DanChurchAid Nepal

Birgitte Qvist-Sørensen, Moderator of the ACT Alliance, says, “The situation is tragic. These people have not been contributing much to global warming, but at the same time climate change has a huge impact on their lives and livelihoods. This is not fair! Climate induced loss and damage must be addressed globally, and big polluters must mobilise the support needed."

The climate action advisor  at the DanChurchAid office in Nepal, Rajan Thapa, said, “The assessment shows that people have been forced from their homes, and that some people choose never to return. This is sad, but also understandable, as climate change continues to pose a threat to these communities. Without adaptation to reduce the risk for flooding and landslides, it is likely that these municipalities will continue to face similar disasters, leading to more climate induced loss and damage.”

“It is not fair that these poor families should have to take loans to recover,” Thapa continued. “This will put a debt burden on their shoulders, as they will have to repay the loan with interest. There is a real need for loss and damage finance, from developed countries, to support people who face climate change on the ground.”

The report highlights a variety of findings based on the research in the three municipalities.  Highlights include:

• Both economic and non-economic loss and damage is very evident in Nepal and is a common concern, as well as an issue of climate justice.

• Although the study covered a limited number of households, the total economic loss for those interviewed in the three municipalities was very high at around USD 388,355, with an average loss per household of approximately USD 4,176.

• Displacement is a huge problem. The majority of people return, but 9% have permanently relocated.

• A majority of the affected people, 82%, were forced to take loans, to resettle after the disasters.

• None of the villages received international support, and they had to rely on the local government and local organisations. However, the support they received was not enough- an average USD 1000-13500 per household is not covered by the received support.

• As the insurance coverage in the affected communities is very weak and no international support was received, the response came from local actors. This shows why locally led initiatives are so important.

“Climate induced loss and damage continue to be a difficult topic in the UN negotiations, where developed countries are reluctant to address the need for scaled up support. As ACT Alliance, we continue to call for loss and damage finance, and support to vulnerable communities facing the harsh effects of climate change,” concluded Qvist-Sørensen.