Stories
Losses and damages from climate change are increasing rapidly in countries that have contributed the least to the crisis - this is frightening!

in countries that have

to the crisis - this is 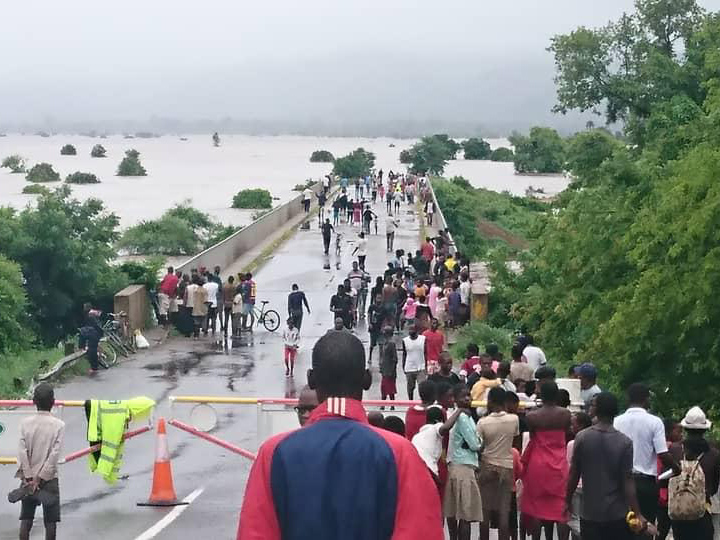 In late January, I texted a friend in Malawi to see how she was doing. She replied that it was raining heavily at the time and that her phone battery was about to die due to a power outage caused by the rain. Flooding from such heavy rain destroyed communities' crops and houses, roads, and, most tragically, resulted in people losing their lives, whilst leaving many others homeless and fearful. When I asked if it had ever happened to them before, she said, "I have never seen such severe flooding before - the situation is worsening as time passes."

The losses and damages caused by climate change are nothing new to many people who listen to the radio, watching the news on TV, and read various articles about climate change - it's also all over social media. People in both rich and poor countries experience loss and damage in their daily lives. Every day, both developed and vulnerable developing countries suffer from extreme weather events like floods, hurricanes, heatwaves, and droughts, as well as slow-onset events like sea-level rise, rising temperatures, ocean acidification, salinization, biodiversity loss, and desertification. However, despite having contributed the least to climate change, the least developed countries are bearing the brunt of its consequences.

Loss and damage is the term used to describe the economic and non-economic climate change impacts that happen beyond adaptation, mitigation and other measures including disaster risk management.

Rainy seasons used to be eagerly anticipated by those who rely on rainfed agriculture; it was so nice to see the green landscape flourish due to the rain - but now, it's like a nightmare to see the rain begin to fall. Knowing that you could wake up to find that your house is no longer there, that the crops in your field have all been destroyed, and that the roads and other infrastructures in your community that appeared to be unmovable have all been destroyed. This is terrifying.

Climate change is already negatively affecting vulnerable countries in a variety of ways, including threatening food insecurity; which results in many people going hungry or undernourished. The communities on the frontlines of climate change are very concerned about how their future will look; wondering how this will end, as the situation only worsens. And when it comes to young people their future looks increasingly uncertain due to daily climate changes.

Today's youth will be the ones who suffer the most in the future. Young people are already aware of what the climate crisis looks like and how much its effects are impacting communities. They are speaking up because they want climate justice and they want to be heard. Are the World's leaders going to listen to the needs of these young people who are advocating for climate-vulnerable communities? If youth are heard, empowered, and included in decision-making processes at the local, national, and international levels, they will play a critical role in addressing climate change, and they will become great climate leaders.

I paid a lot of attention to what was being discussed on the topic of Loss and Damage at the 26th Conference of Parties (COP) of the United Nations Framework Convention on Climate Change (UNFCCC) in Glasgow, Scotland in November 2021, and was in Glasgow myself to attend. The most pressing need of the vulnerable communities was to see Loss and Damage prioritized, as well as the funding to address it, added and delivered. Despite a strong position and a well articulated demand for a finance facility to address loss and damage based on the needs of vulnerable countries, COP 26 fell short on delivering finance for Loss and Damage. Developed countries claimed that this demand was new, despite the fact that developing countries have been communicating this need since the early 1990s.

Addressing loss and damage caused by climate change and delivering Loss and Damage finance should be a priority because it is the only way for communities in the vulnerable least developed countries to experience climate justice. Failure to do so will result in them continuing to experience the disproportional effects of such changes. I, along with several other young people working on climate change, expect  COP 27 to deliver on finance for Loss and Damage and in establishing a facility to channel finance to where it is needed most to help communities on the frontlines of climate change address loss and damage.

Hyacinthe Niyitegeka is a water scientist and climate leader. Her work focuses on advocating for vulnerable communities on the frontlines of climate change. She is the operations coordinator for the Loss and Damage Collaboration (L&DC) where she manages the day to day operations. She also co-founded the Loss and Damage Youth Coalition (LDYC) and co-coordinates their advocacy working group. She is also a part of and coordinates the New Generation of young negotiators from vulnerable developing countries.