BY THE LOSS AND DAMAGE COLLABORATION 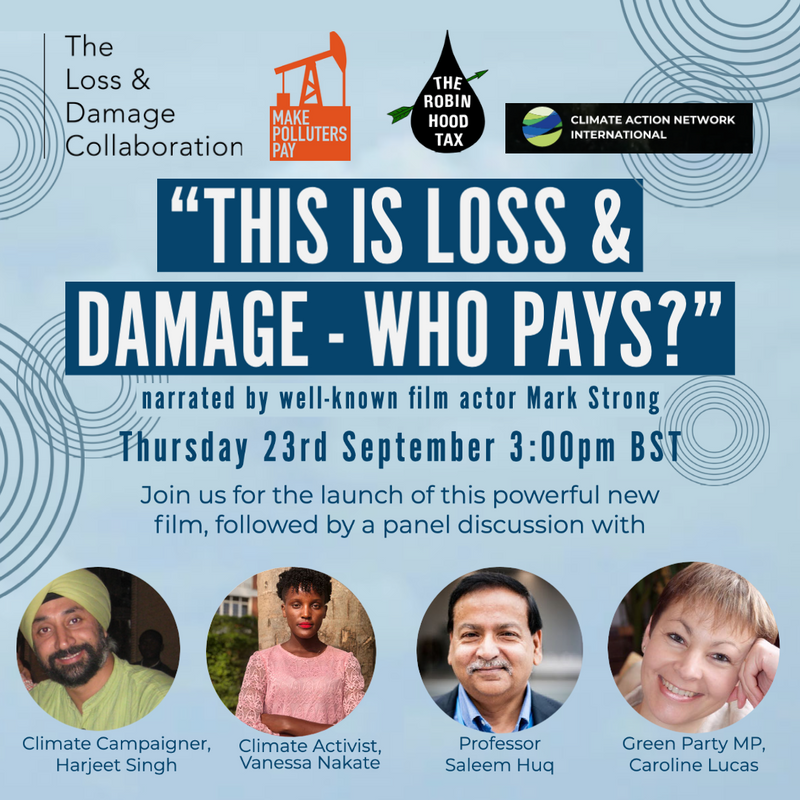 "This is Loss and Damage - who pays?" film launch & panel discussion. ‍

The 23rd of September is Loss and Damage Awareness Day. Join us for a number of events including the launch of the powerful short film "This Is Loss and Damage: Who Pays?".

Narrated by actor Mark Strong and featuring inspirational climate activist, Vanessa Nakate, and Loss and Damage experts, Professor Saleemul Huq and Harjeet Singh, the film offers a compelling way out of the Loss and Damage finance stalemate: an international mechanism funded by the fossil fuel polluters who caused the crisis.

The film explores the injustice of Loss and Damage, rooting it firmly in the shameful failure of countries with the largest carbon footprints - 5 years on from the Paris Agreement - to provide support to those at the sharp end of the climate crisis.

Join us at 3pm (GMT+01:00) on the 23rd of September for the film's premiere followed by a discussion with Green Party MP, Caroline Lucas, alongside the climate activists in the film - Vanessa, Saleem and Harjeet - about how finance for Loss and Damage will be a metric for the success or failure of the COP26 climate conference, in Glasgow, in November.

Get your tickets for the launch here.

‍Other event on the day include the IIED's "Untold Stories: Climate activism and the brutal realities of loss and damage" event , which will showcase three animated short films that tell the story of different types of loss and damage being experienced in Rwanda, Sierra Leone and the Solomon Islands.

Get your tickets for the IIED event here.