Finance for loss and 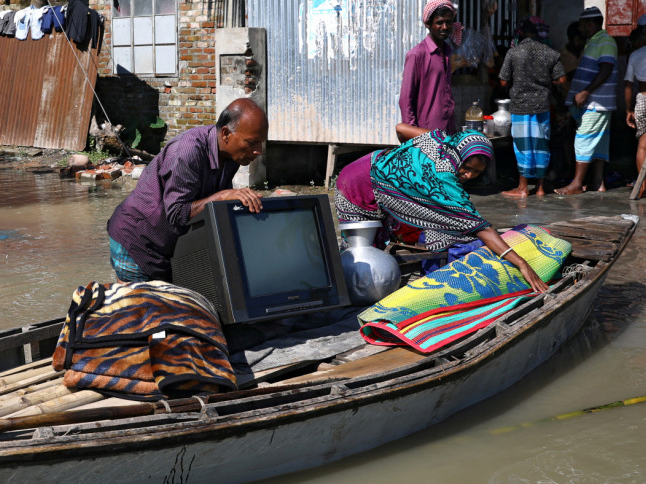 A family moves to a safe place with their belongings after the flood situation worsened in Munshiganj district, on the outskirts of Dhaka, Bangladesh, on July 25, 2020. Floods have become more frequent in countries like Bangladesh, which faces the worst impacts of climate change. Image Credit: Reuters

At the 26th United Nations Climate Change Conference (COP26) in Glasgow last November, Bangladesh Prime Minister Sheikh Hasina, speaking on behalf of 55 vulnerable developing countries under the Climate Vulnerable Forum (CVF), put forward a demand to set up a facility to finance loss and damage from human-induced climate change. This demand was included in the draft of the Glasgow Climate Pact until the last official day of COP26, but after the COP president extended the time by one day, the language in the final version was changed from the "Glasgow Facility on Finance for Loss and Damage" to the "Glasgow Dialogue on Finance for Loss and Damage." This was done at the insistence of the US, who refused to allow the finance facility to be announced.

Needless to say, this was a great disappointment for all the leaders of the CVF member-states.

The impacts of climate change have been scientifically attributed by the Sixth Assessment Report (AR6) of the Intergovernmental Panel on Climate Change (IPCC). The ongoing heat wave in Pakistan and Northern India have led to many deaths and widespread sufferings, and there will be many more such impacts of human-induced climate change everywhere in the world—every day, going forward.

Hence, the developing countries need to regroup and make sure that the Glasgow Dialogue actually results in the setting up of the facility for financing loss and damage in COP27, which is scheduled for November this year in Egypt, who will have the presidency.

The dates for the Glasgow Dialogue have now been announced to be held in June in Bonn during the Subsidiary Bodies meeting of the United Nations Framework Convention on Climate Change (UNFCCC). It is essential for the vulnerable developing countries to participate in the dialogue with an effective strategy.

I offer some suggestions for their consideration to present their views in the dialogue and beyond.

First, this is not the first time that there has been a dialogue on finance for loss and damage; there was a similar one called the "Suva Expert Dialogue," held some years ago, that only considered insurance as the only tool to address loss and damage and resulted in a major initiative called "Insuresilience" led by Germany, but outside the UNFCCC, which was supposed to insure 400 million people. This initiative has piloted a number of different insurance schemes around the world with mixed results. However, it has become quite clear even to the Germans, who are still the greatest promoters, that insurance cannot be a solution for the poorest people in the poorest countries, who cannot afford to pay the premium for insurance.

Alternatively, Germany is now proposing to develop something they call the "Global Shield," which it will place at the upcoming G7 meeting in June. While the details of this Global Shield are still not clear, it does go beyond simply providing insurance, which is a positive step.

However, it is still an initiative promoted by Germany outside of the UNFCCC's scope, and does not formally address loss and damage from human-induced climate change explicitly.

Hence, the climate-vulnerable countries need to insist that the Glasgow Dialogue not simply repeat the poor results of the Suva dialogue on loss and damage.

Second, the vulnerable developing countries must have their own proposal for the dialogue, to ensure that it leads to the setting up of the facility for financing loss and damage at COP27. The details of how the facility would work can be finalised at COP28 in 2023. This procedure of announcing a new entity at one COP and then fleshing out the details at the subsequent COP was how the Santiago Network on Loss and Damage (SNLD) was finalised.

It is also important to recognise that the UNFCCC negotiations are no longer the only game in town as far as the actual finance for losses and damages is concerned—Scotland has already contributed two million pounds into a new loss and damage support with a number of others adding more funds. A significant new player is the Facility for Loss and Damage created by the Multi-Donor Fund of the CVF and V20 (the finance ministers of the CVF), which is managed by the UN and will fund communities in vulnerable developing countries suffering impacts of climate change and dealing with actual losses and damages. The CVF and V20 have invited others to contribute to their facility if they wish to actually help the victims of climate change.

An important element of the current dialogue on loss and damage in the UNFCCC is that the developing countries are not invoking the notion of liability and compensation, rather simply appealing to a sense of solidarity from all countries to help the poorest victims of climate change.

This doesn't mean that the arguments of making the polluters pay has been forgotten, but it has moved out of the UNFCCC discussion and into legal cases under national legal jurisdictions in countries like Germany, the US, Australia and others. It is also likely to be taken to the International Court of Justice (ICJ) by some countries in the Pacific, led by Vanuatu. They will start by seeking a resolution in the upcoming session of the UN General Assembly to allow them to seek an advisory judgement from the ICJ.

Thus, the issue of finance for helping the victims of human-induced climate change has now become the most urgent climate issue, and needs to be addressed both inside and outside the UNFCCC. Bangladesh has played a leading role in this important issue, and should remain at the forefront going forward as well.

Dr Saleemul Huq is director of the International Centre for Climate Change and Development (ICCCAD) at Independent University, Bangladesh (IUB).