Stories
Festival of pledges for Loss and Damage: Are they new and additional and do they meet the needs on the ground?

for Loss and Damage:

Are they new and

they meet the needs

By Members of the Loss and Damage Collaboration 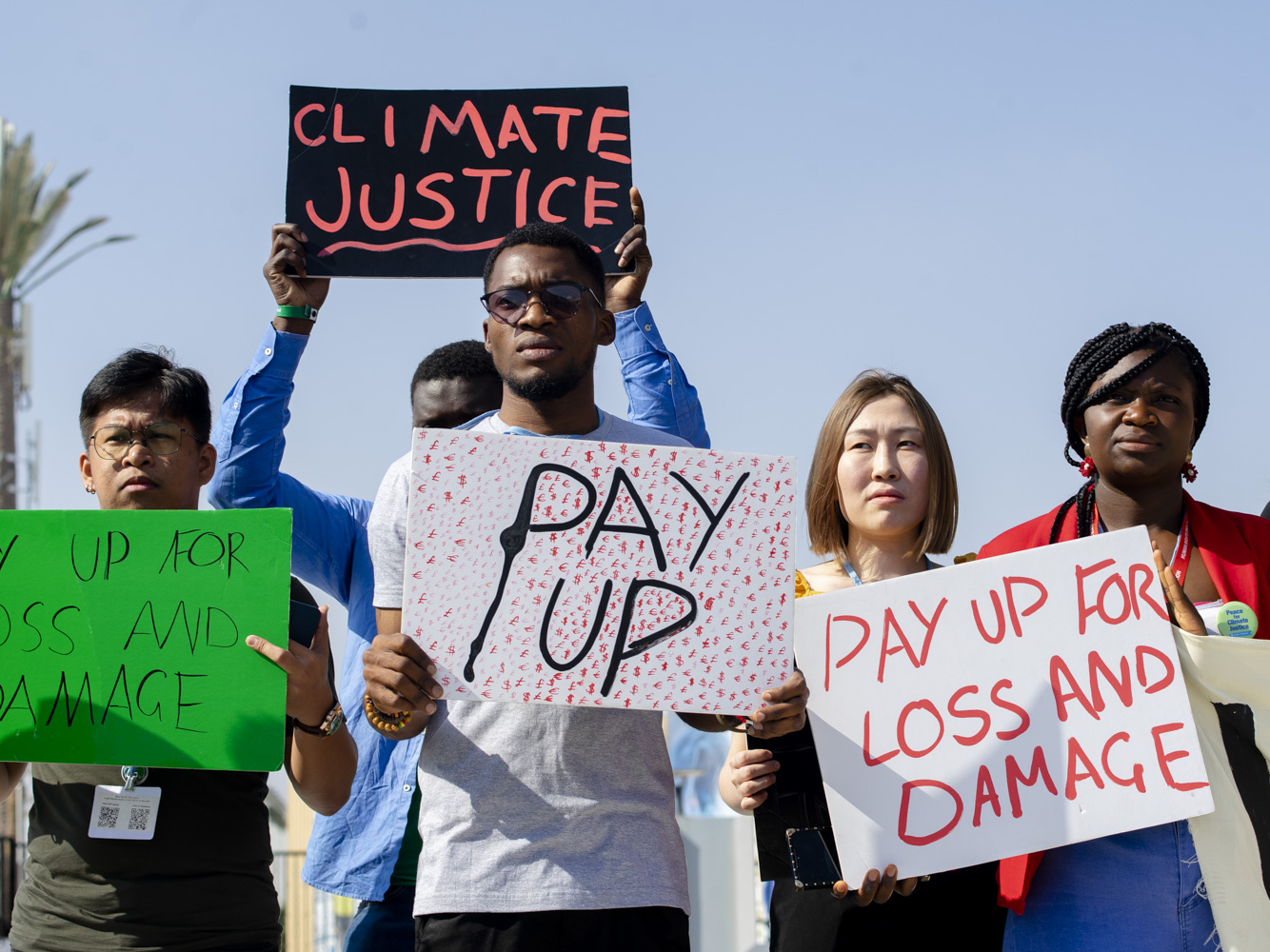 The Loss and Damage Youth Coalition (LDYC) make its loud and clear that the youth demand that loss and damage finance is delivered at COP27. Image Credit: Loss and Damage Collaboration ©

COP27 kicked off with a flurry of announcements on Loss and Damage finance, from Denmark, New Zealand, Belgium, Germany, Austria, Ireland, and Canada plus commitments from sub-national governments Wallonia and Scotland, who first “broke the taboo” on Loss & Damage finance at COP26 in Glasgow.

But what should we really think of these pledges? Are they really fit to be categorised as Loss and Damage finance? Are they going to help achieve a long-term, sustainable, global solution to the issue or Loss and Damage? Or are they a case of “Loss and Damage washing” - a vain attempt at gaining short term plaudits for the in-vogue term on the global climate stage by rebranding old announcements? Here we offer our view based on what we know so far about these pledges.

Denmark became the first UNFCCC party to commit €13m finance for Loss and Damage on 20 September. This commitment is a package - some cash for the Global Shield Against Climate Risk (read our review of such mechanisms here), some bilateral support for NGOs to do Loss and Damage projects, and some still to be allocated. Crucially, all of this money is new and on top of Denmark’s 0.7% commitment to ODA, therefore not a diversion of cash from other vital climate finance projects. However, while this pledge is new and addition, it remains to be seen if the Global Shield will provide on demand support to vulnerable developing countries and the focus on insurance is problematic. We would have loved to have seen Denmark pledge finance to the Santiago Network, especially after hosting the technical workshop on the institutional arrangements to operationalise the Santiago Network, held  in Copenhagen earlier this year.

Belgium committed €2.5 million to Loss and Damage on 7 November. This money will be a contribution to a portfolio of projects in Mozambique which will focus on capacity building for officials on Loss and Damage, Disaster Risk Reduction and research. Crucially, this is not new money but rather a pledge based on existing climate finance commitments, therefore in-effect a diversion of cash from mitigation and adaptation to Loss and Damage. The extent to which this programme can be called addressing Loss and Damage at all is highly questionable, hence cant fully be regarded as cash for the programmes we know we need to see investment in.  A region of Belgium, Wallonia, followed Scotland at COP26 in showing leadership by committing an initial €1m to address Loss and Damage. This money was channelled to the CVF/V20 Joint-Multi Donor Fund for Loss & Damage. Wallonia has pledged a further €2m at COP27, though the funds have yet to be allocated and further information is needed to assess this pledge.

Germany can claim to have committed by far the largest amount to Loss and Damage with its pledge of €170m made on 7 November at the start of COP27. However, all of this money will go to the Global Shield. The Global Shield builds on the InsuResilience Global Partnership launched by the V20 and G20 at COP 23 in 2017, adding social protection to its insurance as part of a package of support. Crucially, insurance is only one part of the solution on Loss and Damage, and inadequate in addressing the full scale of the challenge. Localised, cooperative, southern lead schemes have shown some success in the past, but at its worst, insurance is a “business as usual” response when what we need is systemic change; a way of making Loss & Damage work for the markets. Ireland has also pledged €10m and Canada $7m to the Global Shield, alongside $1.25m for the Santiago Network. Neither of these commitments are additional funding, they are allocations from existing climate finance commitments.

Scotland became the first developed country to pledge finance for Loss and Damage at COP26 in Glasgow, and was heralded as “breaking the taboo” on this issue. At the start of COP27 on 8 November, First Minister Nicola Sturgeon announced a further £5m to Loss and Damage, focusing on slow-onset climatic processes, gender and Non-Economic Loss and Damage (NELD). Crucially, this money is not new, but is an allocation of the funds pledged to the Climate Justice Fund at COP26 by the First Minister. It is also worth noting that the UK Government counts all Scottish aid towards its 0.5% ODA target, though Scotland is said not to be able to stop them from counting like this. Nevertheless, the First Minister’s leadership on Loss and Damage is still very impressive and welcome, especially her affirmation again at COP27 that this issue is about reparations - repaying a climate debt owed to developing countries - not charity.

On 9 November New Zealand pledged NZ$20 million (US$12 million) to Loss and Damage at the start of week one. This funding will be focused in particular in the Pacific on rebuilding livelihoods after disaster, dignified migration and preservation of language and culture. Crucially, this is not new money, it is an allocation from the climate finance commitment made ahead of COP26. Whilst civil society welcomes the acknowledgement of Loss and Damage, it calls on the Government to follow this up with support for a dedicated Loss and Damage Finance Facility at COP27.

Also on 9 November, Austria pledged €50 from 2023 to 2026 which is being labelled as Loss and Damage finance, and will go towards the Santiago Network for Loss and Damage and climate risk and early warning systems (“amongst other possible instruments”). Crucially, this is not new money, but an allocation of already pledged funds. Therefore, in effect, is taking money away from adaptation and mitigation. Adaptation is also woefully underfunded. Loss and Damage funding must be additional, because Loss and Damage needs are additional to adaptation and mitigation needs. That said, the pledging of finance to the Santiago Network is positive as it has been driven by developing countries and will provide on-demand technical assistance to the vulnerable developing countries. More pledges should be going to the Santiago Network and the Global Shield is diverting focus from that urgent need.

On November 12th, Wallonia also reiterated its pledged towards Loss and Damage and doubled it : 2 millions euros for 2023. While the amounts remain very small, Wallonia is dedicated to have a “learning by doing” approach and ready to build experience on Loss and Damage finance at small scale. The money is additional.

Many media outlets are interpreting Loss and Damage finance as, in effect, any voluntary donation from a developed country to climate vulnerable countries to respond to (not necessarily address) loss and damage if the funder claims the pledge as “Loss and Damage Finance”. Moreover, many articles are not providing an analysis of whether these pledges represent new and additional finance which is critical to help us understand the landscape. We cannot allow double counting of commitments whereby developed countries get credit for pledges once when they are initially made and then again when they redirect some of previous commitments towards Loss and Damage.

These smokescreens are not helpful in our fight for Loss and Damage finance to meet the growing needs on the ground in vulnerable developing countries. Particularly if they strip out the definition of the concept (which is inherently about climate justice and polluter pays principles), if they divert attention from the need for a fair, rules based, predictable, adequate system for global Loss and Damage finance, and if they take crucial funds away from mitigation and adaptation. Finance for Loss and Damage must be new and additional to climate finance pledged for mitigation and adaptation and must not detract particularly from finance pledged for adaptation which is critical to reduce loss and damage.