Stories
ACTION AND INACTION ON LOSS AND DAMAGE AT UNFCCC SB56: A BREIF SUMMARY

ON LOSS AND DAMAGE

By THE LOSS AND DAMAGE COLLABORATION 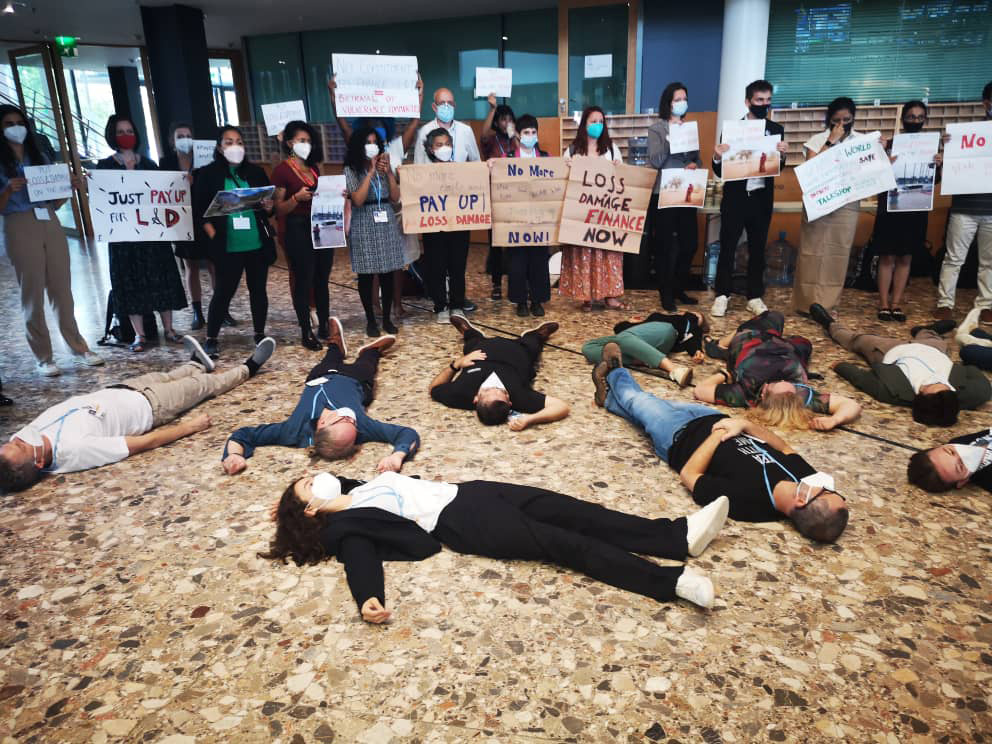 With the closing plenaries of UNFCCC SB56 behind us here is a brief rundown of what happened on Loss and Damage at the climate conference in Bonn Germany and in the immediate aftermath. Following momentum built at COP26, in Glasgow loss and damage was front and centre at UNFCCC's SB56 climate change conference in Bonn, Germany, that took place between the 6 - 16th of June 2022. Loss and damage agenda items included: the Glasgow Dialogue on Loss and Damage, negotiations on the operationalisation of the Santiago Network for Loss and Damage, loss and damage being discussed in the second Technical Expert Dialogues (TED) on the New Collective Quantified Goal (NCQG) on Climate Finance and the technical dialogue of the Global Stocktake of the Paris Agreement.  Additionally, SB56 saw numerous side events on loss and damage, many of which can be watched again here.

THE GLASGOW DIALOGUE ON LOSS AND DAMAGE

The first Glasgow Dialogue took place during the first week of SB56. Split into three-session, which included a plenary session, a break-out group session, and a closing plenary session, each part can be watched back here.

Developing country Parties and groups, together with observers expressed their expectation that the dialogue would be more than a “talk shop” and translate in a concrete outcome at COP27 including the establishment of a Loss and Damage Finance Facility.

However, it remains to be seen if there will be space to discuss a concrete outcome for the First Glasgow Dialogue at COP27 and beyond even though many developing country Parties and groups have repeatedly called for an agenda item on the Glasgow Dialogue.

THE SANTIAGO NETWORK FOR LOSS AND DAMAGE

The draft conclusions proposed by the SBIs chairs for the Santiago Network can be found here and the annex can be read here.

The annex indicates that the work on a decision operationalising the Santiago Network will have to start almost from scratch at COP27. This is extremely disappointing for the negotiators who spent 21 hours in dedicated sessions negotiating the draft text.

Although all of the progress made in Bonn is not reflected in the text of the conclusions there was a lot of headway made exploring the various aspects of the Santiago Network and there is now at least a foundation on which to build at COP27.

All Parties recognise that an advisory function is a critical component to ensure the Santiago Network is robust and fit for purpose. There is also recognition that funding arrangements need to be discussed at COP27.

However, the different visions of the Santiago Network remains a significant point of divergence that needs to be resolved between now and COP27.

Over the next six months, we hope that the COP27 Presidency will convene dialogues to bring Parties together to discuss further the structure and operational modalities of the Santiago Network.

The dialogue was lauded by many developed countries for being an open and transparent space, developing countries were disappointed in the lack of discussion on the scope of what climate finance should cover.

New Zealand emerged as a critical developed country champion during the dialogue when they stated that Loss and Damage should be included in the goal. We hope other developed countries follow their lead just as Scotland did at COP26.

Anything less will be a betrayal of the values and principles of the UNFCCC and Paris Agreement, to ensure that all countries have the means to implement climate action.

In the next technical expert dialogue on the NCQG, we need to see a clear roadmap on key elements to be discussed in future dialogues and to provide a space for a deep dive on the needs and priorities of developing countries.

The new goal must be driven by the needs and priorities of developing countries and the vulnerable people and communities within them.

The technical dialogue of the GST resumed at SB56 with new modalities including roundtables and world cafes. We understand that Loss and Damage was brought up frequently by many Parties and observers.

To move forward on cementing Loss and Damage into the GST It is critical that these inputs are captured. The GST provides an important signal also to the New Collective Quantified Goal on climate finance in the context of mobilising finance to meet the scale of the needs. We look forward to upcoming discussions on both of these issues and the linkages between them at COP27.

In Bonn the SBI Chair concluded that “more time is needed to reach an agreement” on matters relating to the Glasgow Dialogue on Loss and Damage. This meant that consultations were set to continue at COP27 to discuss putting Loss and Damage finance on the agenda.

You can watch the third and final Plenary meeting of the SBI again here.

However, since the end of SB56, Patricia Espinosa — the outgoing Executive Secretary of the UNFCCC — confirmed that a proposed agenda item by the G77 and China on “matters relating to funding arrangements for addressing loss and damage” would be added to the provisional agenda for COP27.

This is encouraging news and could provide much-needed space to negotiate a COP27 outcome on finance for loss and damage.

However, Parties and CSOs should be prepared to defend the inclusion of Loss and Damage Finance on the COP27 agenda as developed countries will try to block its addition to the agenda in the first few days of the COP in November.

THE ROAD TO COP27

With less than five months to go until COP27 there is a lot of work to do to ensure that it is truly an implementation COP as the COP27 Presidency has branded it. We need to translate discussions to action and that will require more ambitious mandates from many developed countries and importantly; space to discuss Loss and Damage finance at every SB and COP going forward.