Future Scenarios film installation, Kunst Haus Wien, Museum Hudertwasser, Vienna, Austria, (2019), Lena Dobrowolska & Teo Ormond-Skeaping
Publications
LDYC
Wildflowers
and Waterfalls
‍
BY RACHEL HAY
We set off that afternoon, excited to discover a new part of the wilderness. We’d tried to find this waterfall, Kiernans Falls, near Snug in Tasmania, Australia, a few years ago and had only made it five minutes in before losing the track. But we weren’t going to let it beat us this time. This time, we’d done our research and we had two more years of bushwalking experience under our belts.

We expected a peaceful walk, along the banks of a whispering river. We expected wildflowers, ferns, moss and the wind to rustle through the leaves of the trees above our heads. We expected a nice waterfall at the end to sweeten the deal even further. We were picturing the kind of walk that clears your mind. The kind of walk that makes you forget about the fact that you’re studying law, have bills to pay and volunteering work to do. The kind of place where you can’t read the news about the most recent climate change-fuelled disaster. We were looking for peace.

As we drove in, we saw a sign warning us that the road ahead had been affected by fire in the summer before. On our left-hand side, we saw the remnants of a burnt forest. On our right-hand side, we could see that that fire had jumped the road and had spread all of the way to someone’s house before it was held off, presumably by firefighters. As we went on, we saw no sign of the fire that had torn through the forest just metres before. We decided to proceed with caution.

On the first part of the walk, the only signs that we saw of the fire was a patch of blackened ferns that had already started to regrow. There were pink and white wildflowers growing along a mossy forest floor. We hopped over a creek that had eaten the track. It was the peaceful experience that we were hoping for.

But the environment started to change gradually. We started to see charred trees. The pink ribbons that we were following had reduced, and some were on the ground rather than hanging in the trees. But we could still see the track and knew that we just had to follow the river upstream if we lost it. We kept walking. 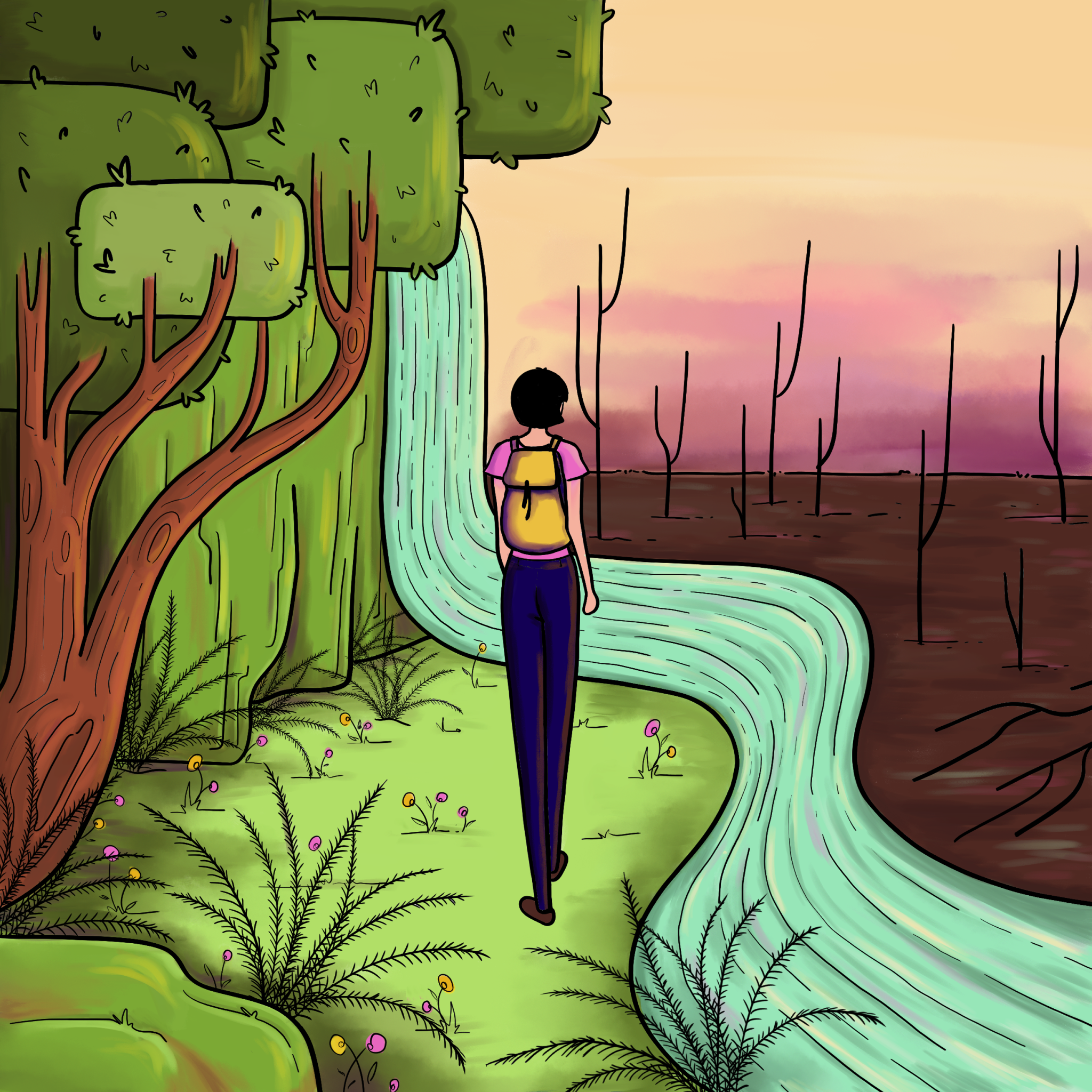 ‍It seemed like it happened suddenly, although the warning signs were there. We emerged into a forest which had been decimated by fire. Everywhere was black and brown – there was no green in sight. The giant trees which had once stood had been reduced to charred, shrunken masses blocking the path. Branches lay precariously against fallen trees, and those which we could hop over gave way beneath us. We were covered in ash. Towards the stream, the banks had completely eroded, leaving pockets of earth sunken and torn. There was still debris clinging to the side of the riverbank. The pink ribbons had disappeared, and the track had gone along with them.

We gave up our idea of finding the restorative, peaceful waterfall that we had dreamed of, and we turned back.

On the way home, we reflected on the damage that had occurred to the forest since we were last there. There had been uncontrollable fires and flash floods, and both of those events had decimated the landscape. We’d glimpsed an ever-closer future where extreme weather events threaten our homes and our wild places. We’d gone trying to escape news of climate change, but instead we’d experienced it first-hand, in our own home.