Future Scenarios film installation, Kunst Haus Wien, Museum Hudertwasser, Vienna, Austria, (2019), Lena Dobrowolska & Teo Ormond-Skeaping
Publications
LDYC
Experiencing
Loss and Damage as an Urban Youth
Living in Rwanda
‍
BY ISHIMWE OLIVER
I was born and raised in Rwanda’s capital, Kigali. Since childhood, I’ve experienced changes in each season, every year more intense: hot in the summer, rainy in the winter. Today the changes are seen in the increasing intensity of rainfall, and the prolonged drought season. Made worse, the community has minimal access to climate change information.

I was first formally introduced to climate change in university, and learned of its effects on me and my community. From there, I began to understand the detrimental effects climate change has on my community, commonly referred to as “Loss and Damage”. Loss and Damage causes environmental and social impacts that affect the community at every level, whether it be the Global South/Global North or Urban/Rural Communities.

Mechanisms to combat impacts of climate change routinely include mitigation and adaptation efforts. While often effective, they do little for vulnerable communities. An experience I recall is of intensive rainfall in early 2020. The Ministry of Emergency Management in Rwanda reported that heavy rainfall caused irreparable repairable damages (damage of infrastructure, roads, etc) and irreparable loss (loss of livestock, crops, human lives). The rainfall along with lightning strikes and heavy soil erosion triggered flooding and landslides in Kigali, and other parts of the country. As a result, 13 people had died, 2 people were injured, and 15 houses were destroyed – where 12 houses among them were from Nyarugenge district. 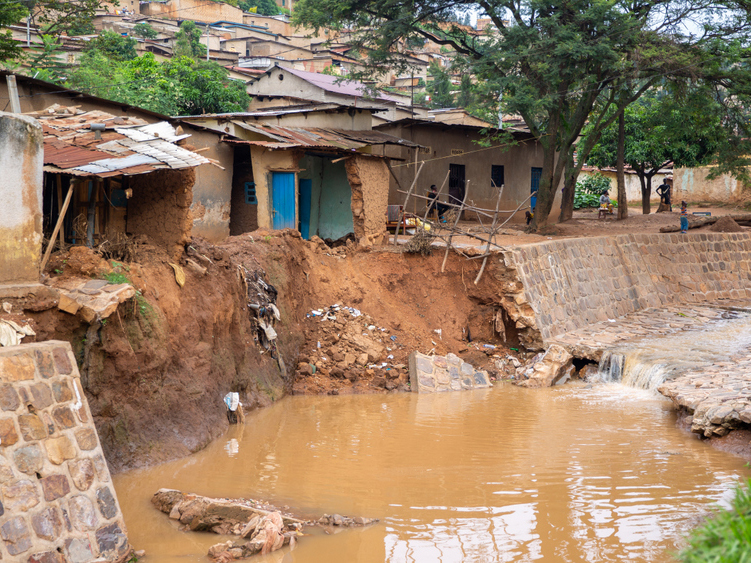 It is easy to place blame on the poor design of Mpazi, but uncontrolled urbanisation and climate change are the main causes of the overflow. The channel is built with stone lining to reduce the depth, and is used at the bank to reduce the width and strength of the soil. The poor construction and unplanned urbanisation accelerates the rise of water levels in the channel which leads to floods, and the destruction of nearby communities. As an urban youth from a developing country, I add my voice to the Loss and Damage Youth Coalition as we seek global climate justice for vulnerable communities, while encouraging frontline communities to design the solution. Youth should have a seat on a table in a manner that allows us the freedom to share our concerns, and be actively engaged in the design and implementation of the responsive actions at the national level. Developed countries must contribute, and engage to take action to address the urgency of climate change.